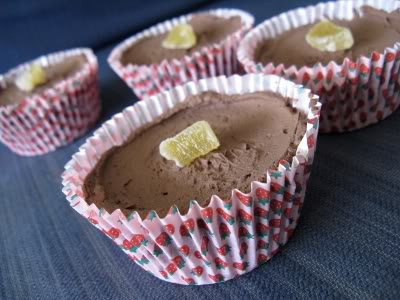 K and Toby recently hosted a small but fancy gathering to celebrate K's birthday.  Michael was determined to make amends after last year's CNY gluten-free dumpling fail and turned out two plates of fabulous handmade gleegan dumplings for the early and eager guests.  I revisited a more recent kitchen success for my contribution - I just knew that I could make those little cheesecakes gleegan-friendly.
Every ingredient in the original recipe (bar the berry garnish) is unsuitable for K's diet and I attacked from the bottom up as I planned my substitutions.  Gingernuts were my most accessible K-friendly cookie, so I grabbed a pack of those and began plotting a ginger-chocolate alternative to the lemony original.  Chocolate and vegan cream cheese made an easy base, I added some coconut cream simply to use up the half-can I had in the fridge (anyone thinking about making this recipe is welcome to skip it!).  I thought I'd fill out the theme with some gingerbread spices and a crystallised ginger garnish.  In the end I found that I needed to add some almond milk to loosen up the mixture and spoon it into the cupcake cases. 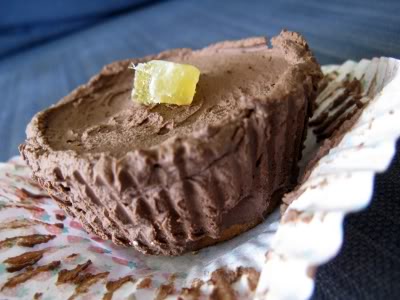 I'm not the biggest fan of vegan cream cheese but it did the perfect job here - these had an astounding buttery texture, almost like a dense mousse.  The spices got a little lost in the mix and I should have made smaller servings to share around this potluck-style situation, but I reckon they were a success nonetheless.  My batch aren't the prettiest little thangs either - someone with a star-tipped piping bag and whole lotta patience could turn these into something really fancy.
(You can check out all the guests' contributions here.)


Line a muffin pan with cupcake papers and place a gingernut biscuit in the bottom of each one (this should make 15-18 tartlets).
Gently melt the chocolate in your preferred way and set it aside to cool.
Beat together the cream cheese and coconut cream until fluffy. Add the melted chocolate and spices, beating until combined.  Gradually beat in almond milk until the mixture has the texture of buttercream icing.  Spoon or pipe the chocolate mixture into the paper cases and garnish each one with a piece of crystallised ginger.
Store the cheesecakes in the fridge or freezer, depending on how firm you wish them to be.  If you freeze them, be sure to allow them at least 30 minutes to partially thaw before serving.
Posted by Cindy at 3:15 pm