July 3, 2015: Las Vegan have announced that they're closing the cafe and going to focus exclusively on catering from now on - we've sampled their catering before and it's great. 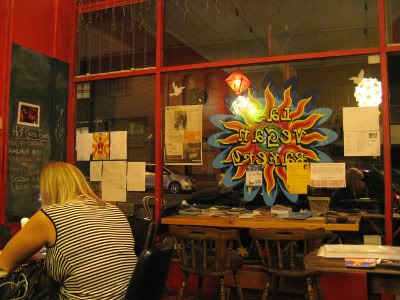 Las Vegan changed management a few months ago and I can happily report that it's looking good.  It's casual and unpretentious (though I suppose offering mock meat is technically pretentious!) and not as hippy-dippy as I always assume it will be.  Michael and I stopped by for dinner before a Thursday night comedy show.  The staff were incredibly friendly, although not entirely efficient; our meals arrived promptly so I was content. 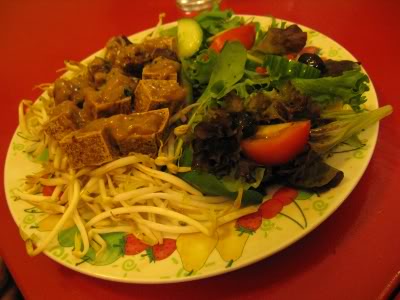 Michael had the T & T salad ($10), a garden salad featuring bean shoots, chunks of tofu and tempeh and satay sauce.  He nominates the satay-slathered tempeh pieces as the highlight and was happy that it all tasted pretty healthy. 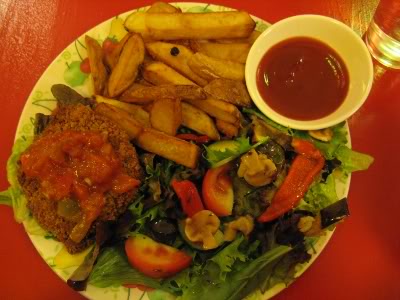 I went for the snitzel & chips ($10), which was served with more garden salad.  I really liked the proportions here - a modest and non-greasy piece of crumbed mock meat topped with chunky tomato sauce, then oodles of fresh veg and a satisfying serve of chunky skin-on chips with plenty of dipping sauce.  I hear these snitzels are a real knock-out in burger form too.
This is the kind of not-entirely-junk food I like making at home: burgers, chips, salads and sauces... there are also beans, mock mince and rice balls elsewhere on the menu.  With good execution and very reasonable prices, I may start relying on Las Vegan for those meals on my too-lazy-to-cook nights.
____________
In the past year Las Vegan has appeared on blogs The Fat-Fuelled Vegan, Vegan About Town, In The Mood For Noodles, Half-Eaten, Cupcake Kitteh, Vicki Vegan and crosslegged on the front lawn.
We've previously blogged about Las Vegan here and here.


Accessibility: Pretty good - reasonable entry, plenty of space around tables, order at the table and pay at a low-ish counter.  We haven't visited the toilets.
Posted by Cindy at 10:00 am