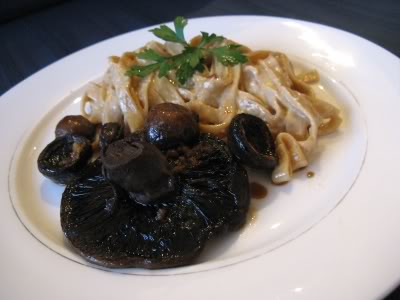 We don't eat a lot of pasta here at Casa Non Carne but the cooler weather got me in the mood.  We spotted some fabulous-looking fresh pasta at the Queen Vic Markets recently and took home half a kilo of pumpkin and poppyseed fettuccine.  I was keen for the creamy comfort of Alfredo sauce and stocked up on mushrooms for the veg component of our meal.
This alfredo sauce recipe is a popular vegan rendition from VeganYumYum - I bookmarked it when it was published a year and a half ago, and since then a few of my favourite veg blogs have given it favourable reviews.  Although the recipe simply has you throw all the ingredients into a blender or food processor at once, I took a little more care the grind the cashews first before introducing other ingredients.  I'd also recommend mixing the margarine into the ground cashews early, 'cause it created a weird fatty froth when I added it after the soy milk.  Ingredient sequencing aside, this sauce is a cinch to make and a pleasure to eat.
The mushroom dish is one that Marieke Hardy swears by, and I followed her online trail to this site for the recipe.  It's intended for shiitake mushrooms, Marieke uses oyster mushrooms, and we went for a flat/brown combo that turned out great.  We probably used a little too much marinade, but I put the leftover mushroom juices to good use later in the week.  This is one of those neat recipes where just a little effort pays off big in the taste stakes.
While I intend to make both of these recipes again, it probably won't be in the same meal.  They each derive a good portion of their savoury flavour from tamari and in combination it's a bit of a salty-soy overload.  I'll make it my mission to find these fine dishes more harmonious matches.

Marinated mushrooms
(based on Dusty's recipe, on the recommendation of Marieke Hardy)


Preheat the oven to 180°C.  Brush any dirt off the mushrooms and arrange them, gills up, in a single layer in a high-walled baking dish. 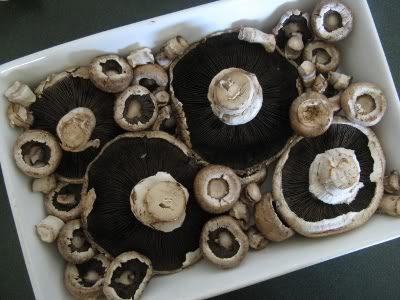 Whisk together the oils, tamari and wine and pour them over the mushrooms. Sprinkle over the garlic.  Cover the tray with foil and bake the mushrooms for 40 minutes. 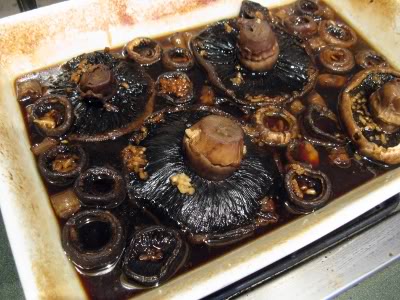 Hurry Up Alfredo
(from VeganYumYum)


In a food processor, grind the cashews as finely as you can. Blend in the margarine, then the soy milk, then the remaining ingredients (excluding the pasta) until you have a smooth sauce. Taste it and adjust the seasoning to your preferences.
Cook and drain the pasta, then return it to its saucepan. Stir through the alfredo sauce and serve.
Posted by Cindy at 5:57 pm