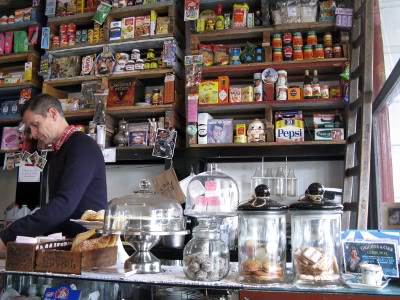 Grigons & Orr has received lots of blog attention already (see the huge link list at the bottom of this post) and we're well overdue to add it to our catalogue of inner north breakfasts.  They're set up as a tribute to the old-fashioned milk bar, with shelf-upon-shelf stacked with groceries, mixed lollies and other sweets at the counter, and milkshakes on the menu. 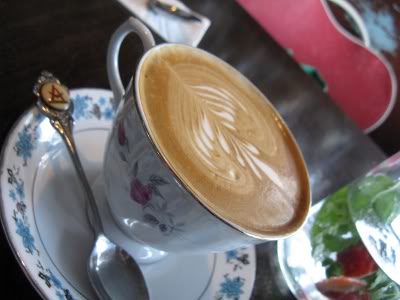 Food-wise, there's a lot that appeals to the likes of me: French toast, pancakes, apple fritters and even more sweetness besides.  On the savoury side there's a lot of eggs but also zucchini hash browns and pan-fried tofu.  It's an extensive and slightly off-beat menu, and it caters nicely to vegans and coeliacs. 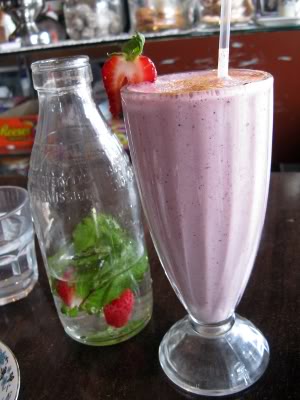 While Michael ordered his usual coffee, I tried out House Smoothie ($6), a gently sweet and slightly tangy concoction of bananas, berries, yoghurt, agave and cinnamon. 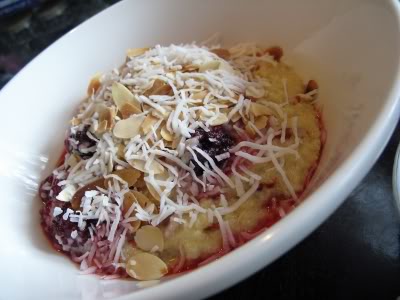 Michael's meal order, though, was far from his usual - a couscous porridge made with coconut cream and topped with goji berries, toasted almonds, shaved coconut and honey ($11).  The toppings were terrific but the couscous was a little dry. 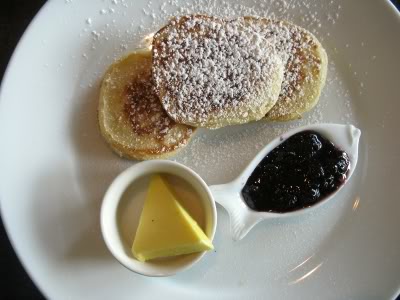 I stopped right at the first item on the menu - home made crumpets served with butter and berry conserve ($7.50).  They struck me more as slightly puffy pikelets more than any crumpet I've eaten before and between the pikelet-like crust and the icing sugar dusting, the butter and jam were not inclined to soak into these at all.  A little disappointing but still undeniably tasty. 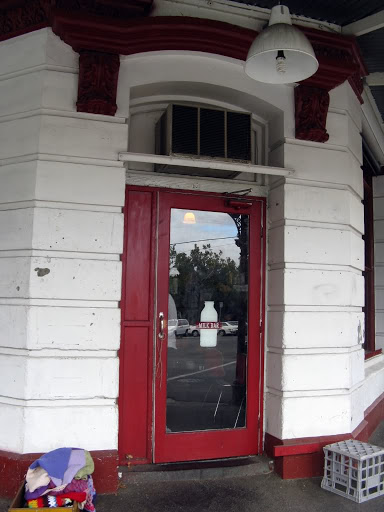 These were minor food flaws; Grigons & Orr offer so many interesting veg options that we're pretty keen to give them a second and third chance.  A few other bloggers spoke negatively of the service but we've no complaints - staff were proficient and generally friendly and we weren't kept waiting too long to eat.
We were lucky to score a table inside but it's worth noting that most of this cafe's seating is outdoors by the road.  There's a box of crocheted blankets available for your comfort but they're probably insufficient coverage in rainy weather.  We followed our fine-day visit with a satisfying stock-up at the Queen Vic Markets.  I'd love to make this a habit on cycle-friendly Saturdays.
____________
Grigons & Orr has been reviewed by veg-bloggers Vicki Vegan, Eat More Vegies, Easy as Vegan Pie, In the Mood for Noodles and Vegan About Town (twice).
There are more positive accounts at Frances Baker, Things I Ate, Melski Moments, Pinch of Salt, Mel365, Bagni de Lucca and Beyond, Once Edible, Now Consumed, Do you want to stay for breakfast?, Hookturns, Kristin Hove, Diary of a Pampered Housewife, Flagrant Food Fawning, Eat and be Merry, What's for Tea?, Espresso Melbourne, Suck My Radish, KC Food Affairs; ambivalent ones at Honey and Soy, Melbourne - Caffeine City, Knife and Fork Dork, Two Front Teeth, Melbourne Dining Experiences; and negative experiences from The Breakfast Blog and Breakies worth getting up for.
____________
Grigons & Orr
445 Queensberry St, North Melbourne
0403 515 814
veg breakfasts $6-$14.50
http://www.grigonsorr.com.au/


Accessibility: The interior of G&O is crowded and has a step entry; we didn't visit the toilet but it would likely be less accessible still. Exterior seats are accessible, I suspect that some are on slightly sloped pavement.
Posted by Cindy at 1:02 pm