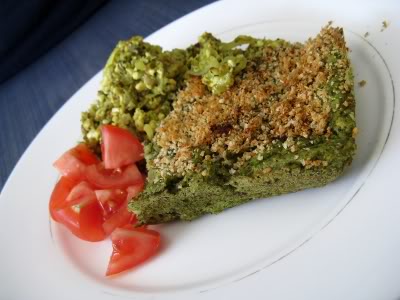 Having briefly become the hero of the house with my Vegan Brunch shenanigans on the previous weekend, I was ready to go back for a second shot to accrue still more favour. Rather than revisit the vegan omelettes for a third time, we decided to try out a tofu scramble with pesto. Of course a potato-based side dish was mandatory, but we decided not to fry this time, instead opting for potato spinach squares.

This was just as much work as the week before, but probably ended up being a little less successful. The scramble was great, but I think if we'd chosen a drier tofu it would have taken less energy and been a bit more impressive. Still, the flavour and oiliness from the pesto added to the nicely spiced scramble to make something quite delicious. The potato spinach squares were good but not as amazing as they sound in the book - it could be that I undercooked things slightly, but the herby lemon flavours didn't really shine through the potato and spinach, and Cindy and I were both nostalgic for the crispy fried goodness of the diner home fries I'd made the week before.

Still, this got the weekend off to a cracking start - with a bit of pre-planning and some better organisation, I can see brunches becoming a regular feature at our place.

Tofu scramble (based very loosely on the recipe in Vegan Brunch)

600g silken tofu (note: use something drier than this, the silken tofu retains too much moisture which takes ages to fry off), drained as best you can
1 onion, chopped finely
4 cloves garlic, minced
2 tablespoons olive oil
1/4 cup nutritional yeast
3 heaped tablespoons pesto (we broached the vegan-ness of this brunch by using store-bought pesto with cheese in it here, but you can use anything)
black pepper

Mix together the cumin, thyme, turmeric, salt and water in a small cup. This is your spice mix to give some flavour to the scramble.

Fry the onion and garlic in the oil until the onion starts to soften, about five minutes.

Smush up the tofu and add to the pan, stirring often - the goal here is to fry off any of the remaining water in the tofu and brown it up slightly. This will take more or less time depending on how much water is in the tofu to begin with - it took us ages, but still worked out okay in the end.

Add the spice blend and the pesto and mix it through before adding in the nooch and the black pepper. Cook for another few minutes until you accompaniments are ready and serve warm.

Bring the potatoes to the boil in a large pot and then simmer for 20 minutes until they've softened to a good mashing consistency.

Pre-heat the oven to about 200 degrees.

Drain and pop them in a mixing bowl. Mash them up, adding the nooch and oil and mushing everything until it's smooth.

Drain the water out of the thawed spinach in a sieve or colander and then combine it with the mashed spuds.

Add the oregano, lemon juice and zest, salt and a generous dash of black pepper, along with 1 cup of the breadcrumbs. Mix everything thoroughly.

Lightly grease a 20 x 30 cm baking tray. Spread the potato mix in evenly and sprinkle with the remaining breadcrumbs and a few pinches of paprika. Spray the top with oil to help the breadcrumbs brown up deliciously.

Bake for 30 minutes, until the potato is pulling away from the side of the tray. Check that the middle is reasonably set. Cool for 10 minutes or more before serving.
Posted by Michael at 12:06 pm