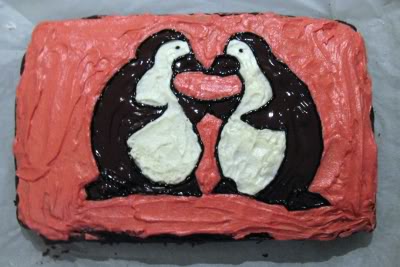 K and I baked this cake on a Saturday afternoon to celebrate the engagement of our penguin-loving friends Bec and Craig.  K has a proud record of decorative cakes but I'm a little less inclined that way - just piping cheese into zucchini flowers has previously sent me over the edge and I've been a messy icing slatherer ever since. (And though K's done this before, her accounts of the process have revealed much stress along the way.)  We were both thrilled to discover that it's a much more enjoyable and less fraught process when we embark on it together!
The chocolate cake recipe we used wasn't the tastiest around so I won't transcribe it here.  It did have the asset, though, of a sturdy texture that supported our icing experiments well.  K showed me that the best way to get a line drawing onto a cake is to draw or trace it onto baking paper, then use a toothpick to punch holes through the baking paper onto the cake.  Joining the dots with a black icing writing tube takes a steady hand but is a heck of a lot easier than free-stylin'!
K whipped together a vegan buttercream in the meantime (just using icing sugar, Nuttelex and a smidge of vanilla) and we started on the icing-between-the-lines challenge.  There was a little fussing and scraping and repeating here but we eventually fell into an agreeable pattern using a flat piping head and a teaspoon to flatten it out further.  We used melted dark chocolate and teaspoons for the dark penguin sections; if you take it gently enough the black icing stops it from running out everywhere.  We whipped pomegranate molasses and red food colouring into the remaining icing to fill out the background - it had a nifty sweet-sour flavour to contrast with the darker cake.
We were not the most efficient decorators in the world (we chopped and changed techniques and equipment and even had a couple last-minute trips to the shops) and we're a long way from mastering the decorative arts.  But K and I were both proud of what we'd made - Bec & Craig loved it! - and the upsets we avoided by working on it together.
____________
You can read K's account of this cake over at In The Mood For Noodles.
Posted by Cindy at 11:07 am