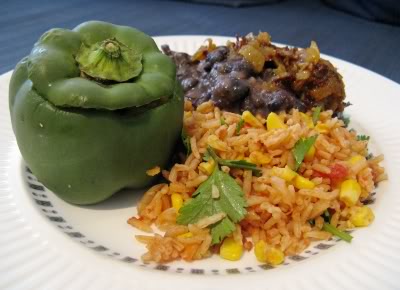 The arrival of corn in our vegie box coincided with a realisation that it had been a long while since we'd whipped up any Mexican food at home. Cindy wanted something to stuff capsicums with and already had the accompaniments picked out: chipotle onion sauce and black beans. I had a quick scrabble around the internet trying to find a Mexican rice recipe that would use up our corn and not require any more shopping, eventually settling on something fairly simple from Spark Recipes.

It's straightforward to make, filling and relatively healthy, but this was a bit lacking in flavour in the end. I guess when it's being served up with delicious chipotle-based sauce and rich black beans, it doesn't need to offer up a massive taste sensation, but I was still a little disappointed in the blandness of it. Don't get me wrong, it used up the corn and combined pretty well with the capsicums, beans and spicy sauce, but I don't think we've found the ideal Mexi-rice recipe just yet. Any suggestions?


Heat the oil and butter in a large pan. Add the rice and fry (stirring often) for 5-10 minutes, until the butter is absorbed and the rice has started to turn golden.
Add the onion, garlic, tomatoes, corn and water, stirring everything together.
Bring it all to the boil, cover and reduce to a simmer for about 25 minutes, until the rice is cooked and the liquids absorbed.
Serve with the coriander on top as a side, or stuff a roasted capsicum with it.
Posted by Michael at 7:25 am