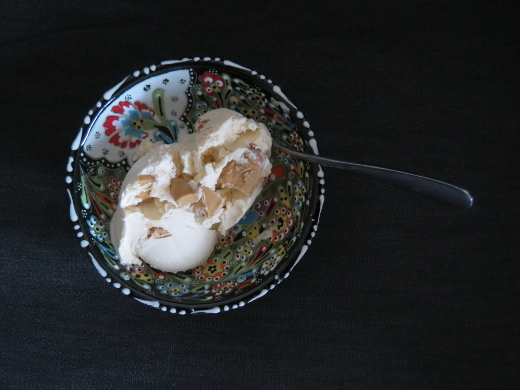 This icecream recipe isn't quite my usual style. Nope, it's not from Ottolenghi's latest book. It's not a home-grown vegan trick. It doesn't really require an icecream maker. And it's flavoured with white chocolate, the least chocolatey of all chocolates. Yet Michael, who skips past every white Lindt ball in the box, declared it the best icecream I've made in years!

So what is this icecream? It's from the blog Delicious Everyday. It's mostly just made from double cream and sweetened condensed milk, which feels a bit like cheating, but is so sweet and thick and creamy that it really doesn't need to be churned. And it's flavoured with caramelised white chocolate.

Caramelising white chocolate was pretty funny this first time around - unwrapping it, popping it whole onto a baking tray, and roasting it in a low oven for over an hour, until it browned. The chocolate only kinda melts, and it's surprisingly difficult to work a spatula through it and make sure the chocolate roasts evenly. I was cautious, turning my oven to only 100°C, and as a consequence I spent an hour and a half on this job instead of the directed hour at 120°C. I'll know better next time.

The result is rich, rich, rich, with a touch of toasty caramel depth. I served small sensible scoops, with a fruit salad of mango and pineapple dressed in lime juice, when I had my international guest and his wife over for dinner. (The rest of the meal was much more predictable, with Michael and I tripling down on Ottolenghi recipes - a crushed lentil platter, coriander and yoghurt-dressed pumpkin, and a Spring salad.)

150g white chocolate (make sure it's based on cocoa butter, not another vegetable oil)
395g can sweetened condensed milk
600mL double cream

Place the chocolate in a small baking tray and roast it for 60-90 minutes, stirring at 10 minutes intervals with a baking spatula, until the chocolate has developed a deep caramel colour. The texture is hopefully smooth, but unexpectedly thick! Here are some indicative photos from the source blog.

Transfer half of the caramelised chocolate to a medium bowl. Gradually whisk in the condensed milk until smooth, then whisk in the cream until everything's well mixed.

Freeze the icecream for at least 4 hours before serving. I found that it was easiest to scoop after 15 minutes at room temperature.
Posted by Cindy at 9:48 pm