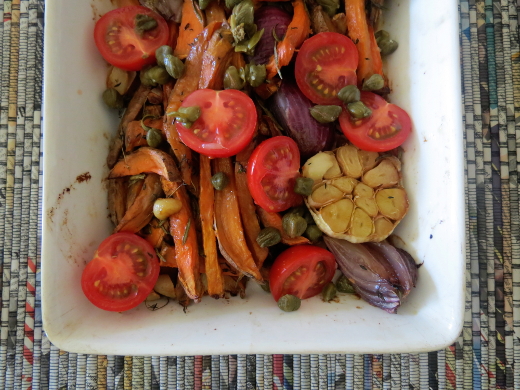 Our second Christmas Day side came from Ottolenghi's Plenty. It's a lovely mixed tray of roasted vegetables - sweet potato and onion wedges, a whole head of garlic, cherry tomatoes - tossed through with herbs and dressed in a tangy caper vinaigrette the moment they come out of the oven. There's supposed to be parsnips involved as well, but I've not had much success baking them at home and I was planning to halve the recipe, anyway.

Initially I stretched the sweet potatoes, onions and garlic over two baking trays, then once they were becoming tender and I needed the extra oven space for sausage rolls, I piled the vegetables up in a single high-walled tray. They were going swimmingly until, 20 minutes before we were due to eat, our oven's heating element expired! The sweet potatoes and onions were tender enough but not as caramelised as I might've liked; the garlic was perfect; the tomatoes were near raw. It could have been a lot worse, and I'll be interested to see if I can recreate this a little better now that our oven's repaired.

Peel the sweet potatoes and chop them into wedges. Peel the onions and slice each one into six wedges. Slice the garlic bulb in half horizontally, Place the sweet potatoes, onions and garlic in 1-2 baking trays. Drizzle 2-3 tablespoons of the olive oil over the vegetables and toss it through a little. Roughly pull the thyme and rosemary leaves from their stems and scatter them over the vegetables. Roast for 40-50 minutes, until cooked through.

While the vegetables are roasting, slice the cherry tomatoes in half. Make the vinaigrette by whisking together lemon juice, capers, maple syrup, mustard, and the remaining 1 tablespoon of oil, seasoning with salt and pepper.

When the vegetables are roasted, add the tomato halves and bake everything for a further 10 minutes. Pour the vinaigrette over the vegetables as soon as you remove them from the oven, and serve them warm.
Posted by Cindy at 7:54 pm