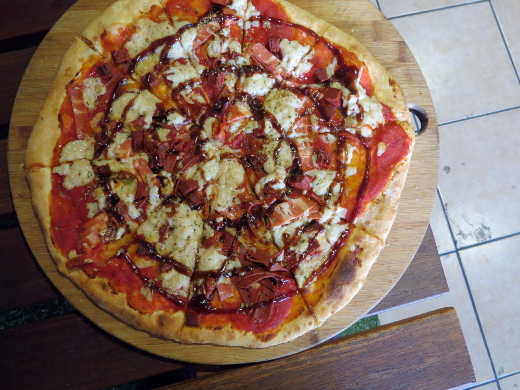 CassellBella's Bakery & Cafe has been on our radar a while, and it took three visits to the neighbourhood before we managed to catch it open! This only reinforces the cheerful, casual and slightly haphazard vibe we picked up here. The tiled walls, lino and drinks fridge say 'takeaway shop', while the picnic tables & astroturf bring a bit of the outdoors inside.

The menu is printed in an endearingly daggy suite of fonts, and liberally edited with texta. These probably mark the cafe's transition towards veganism - by my scan, just about everything is free of animal products with dairy options on a few of the beverages. Many, if not all, of the baked goods on display are vegan. Gluten-free folks probably won't find much to order here, and coeliacs might prefer to avoid a flour-focused bakery as a matter of safety! 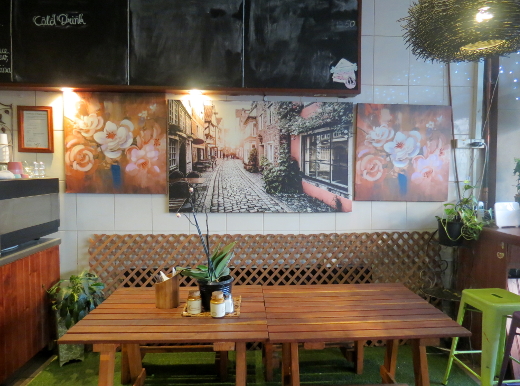 For the gluten-eaters among us, there are a dozen wood-fired pizzas to choose from, breakfast fry-ups, toasted focaccias and pasties, which you can wash down with a juice, smoothie, milkshake or coffee. Mock meats, mock cheeses and coconut icecreams are in stock and featured in many dishes.

Seeking a tasty, simple dinner before a gig at the Northcote Social Club, Michael and I ordered just a single pizza to share (pictured top). The Mock Meat Lover ($19.90) fit our bill perfectly, layered with mock pepperoni, bacon and ham, charged with fresh garlic and oregano, topped with vegan mozzarella and a swirl of sweet barbecue sauce. The portioning is large; best for splitting, taking some home for later, or the most insatiable of appetites. 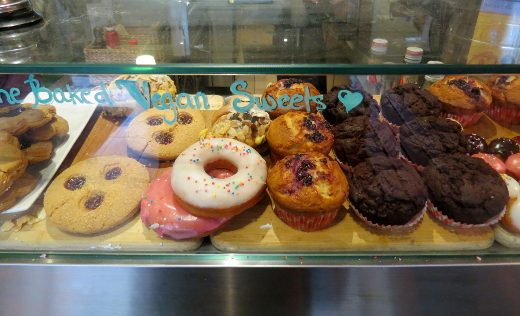 Looking through the rest of the menu, Michael's taking a raincheck on the Super Hot pizza, while I'm likely to splurge on a Classic or Mock Chicken Hawaiian pizza one day. We giggled over the the Thai Fish Supreme pizza, which has been texta-edited down to Napoli sauce, vegan mozzarella and Spanish onion.

Such quirks only served to entertain rather than irritate us. CassellBella's is a cute spot and we like what we've tasted so far!
____________


Accessibility: Cassellbella's has a flat entry and clear corridor through the centre, although the tables are somewhat densely arranged. We ordered at our table and paid at a high counter. The toilet is a unisex cubicle but not accessibly designed; there's uneven ground and several steps on the way there, the light switch was a mess and it's all pretty run-down.
Posted by Cindy at 7:59 am