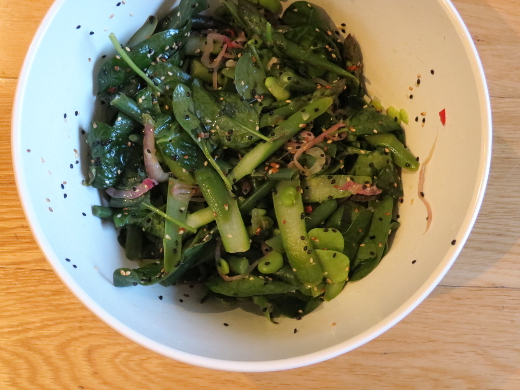 September saw the fifth meeting of our Ottolenghi potluck gang after a few months off, with a vaguely spring-themed dinner to take advantage of Victoria's newest public holiday. (The wonders of our previous meals can be seen in various degrees of blurriness here, here, here and here.) 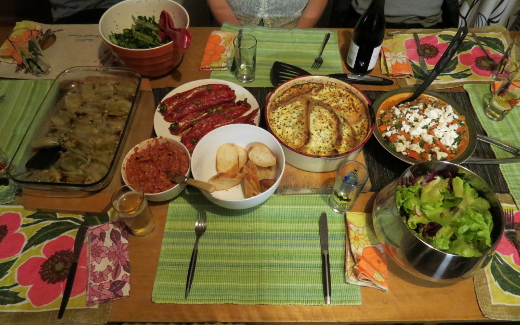 As always it was an incredible spread, featuring stuffed onions, muhammara, stuffed peppers, rosemary savoury bread pudding, carrot & mungbean salad, green salad plus the spring salad featured in this post and an incredible dessert that Cindy will post about in a day or two.

I was inspired by Melbourne's burst of warm weather to go for a very spring-themed dish, a simple salad making use of asparagus and broad beans that are both at their peak right now. I altered a couple of things, frying the shallot gently rather than using it raw and bafflingly failing to buy nigella seeds. It was reasonably straightforward by Ottolenghi standards and added some freshness and variety to our meal - the sesame oil was pretty dominant flavour-wise, so you might consider going a bit heavier on the lemon juice and chilli.

Ottolenghi has many show-stopping salads, and this is a more unassuming effort - it's a worthy contribution to a big table of food, but it's probably never going to be the star of the show.


In a small frying pan heat up 1 tablespoon of the olive oil and fry the diced shallot for 5 minutes or so, until it's nicely softened. Set it aside for later.

Fill a bowl with iced water to cool the veggies once they're blanched.

Drain the veggies and set the asparagus and beans aside to dry. Pop the broad beans out of their little protective shells and then combine them with the other veggies (including the spinach) in a large bowl.

Stir through the shallots, the chilli, sesame oil, the rest of the olive oil, the lemon juice, the sesame seeds and the salt and serve.
Posted by Michael at 8:19 pm