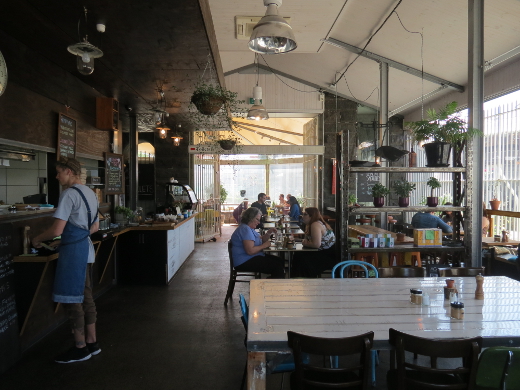 The Glass Den is a roomy Coburg cafe set within the D-division gatehouse of the now-decommissioned Pentridge Prison. In the past month they've really ramped up their vegan menu options, so we skulked in for a late breakfast on Sunday morning.

Though it's a meat-and-all menu, it's clear they know their stuff. There are dairy and three non-dairy mylk options on the first page (plus a vegan coffee frappe hidden further back!), and vegetarian/vegan/gluten-free symbols scattered everywhere. They're almost to be expected, perhaps, on the chia pudding and smashed avo dishes, but coconut mousse, coconut bacon and mushroom substitutions mean that plates like the big breakfast and the calamari salad are also on the veg*n table. You've actually gotta hunt for the eggs and bacon (they are there). It all made for some tough  decision-making. 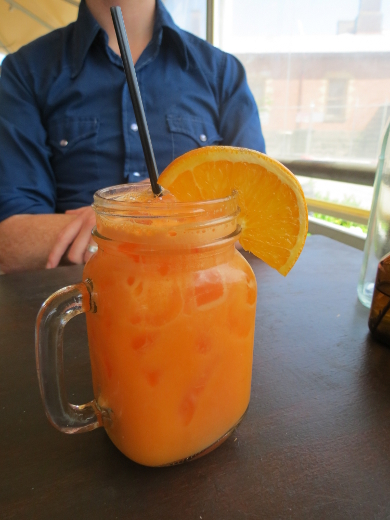 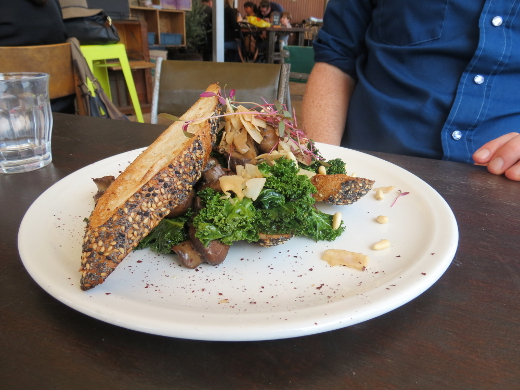 With that done he demanded a second big nutrient boost from the Shrooms & Kale ($15.50), a plate of multi-grain sourdough toast, sauteed kale and garlic mushrooms, pine nuts and coconut bacon. The coconut bacon lacked colour but the dish was well-seasoned. Unfortunately the thick, crusty toast and lack of sauciness rendered this a little dry. 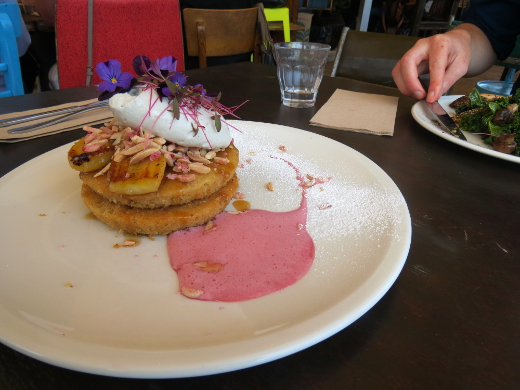 I took a chance on the coconut hotcakes ($16.90). They're vegan and gluten-free by default and read a little overwrought - "gluten free hotcakes, grilled banana, berry foam, maple syrup, candied almonds and coconut". Actually they seem to be one of the cafe's most popular dishes, and I saw several pretty plates delivered to the tables around me before I got my paws on this one.

My suspicions were unfounded - these were excellent hotcakes, with the texture of a flourless almond cake. The fruity trimmings were very generous and complementary. I can't think of many (any?) better gleegan breakfasts around Melbourne. 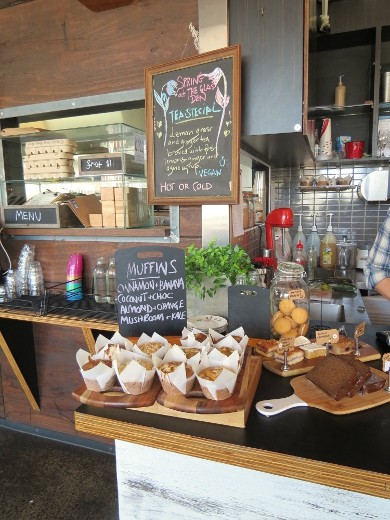 With a belly full of hotcakes, I barely glanced at the sweet treats by the till. But here they are! They looked nice, and some of 'em were labelled vegan too.

Service was welcoming but a little slow, and it won't deter us from visiting again. This is a menu we want to see more of. 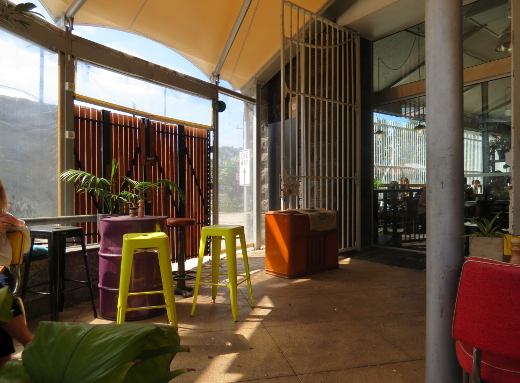 
Accessibility: There's a flat entry and clear corridors throughout the cafe, but the tables and chairs are densely arranged. We ordered at our table and paid at a low counter. We didn't visit the toilets.
Posted by Cindy at 7:07 pm