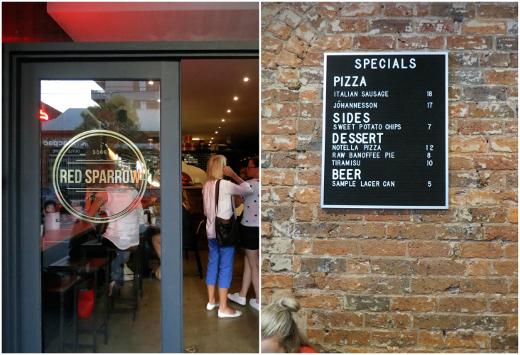 Late in 2016, the Melbourne veg*n grapevine was buzzing with rumours about a new vegan pizza place in Collingwood. The opening got postponed a few times and the excitement steadily grew. So when they finally threw their doors open, it didn't take long for us to join a gang of Melbourne veg*ns to go and check them out. Part of the delay in their opening was related to the transportation of their fancy pizza oven - they're going for a similar thin-crust wood-fired vibe to the much loved Gigi in Sydney and they've got the setup to match.

The menu has something for everyone - classics like margherita, mock-meat extravaganzas like pepperoni and healthier options like the supergreen (spinach and kale pesto with broccoli and zucchini). We ordered eight pizzas between the eight of us, and the staff were kind enough to cut things into (uneven) eighths to make the whole sharing experience easier.


The first four, clockwise from top-left were: the classic sausage (bbq base topped with beer brat, jalapenos, red onions, mozzarella and aioli, $18), the eggplant (tomato base, smoked eggplant, pear, rocket and balsamic reduction, $18), the Italian sausage (a special, $18) and the pepperoni (tomato base, roasted capsicum, pepperoni, mozzarella, oregano, $17). 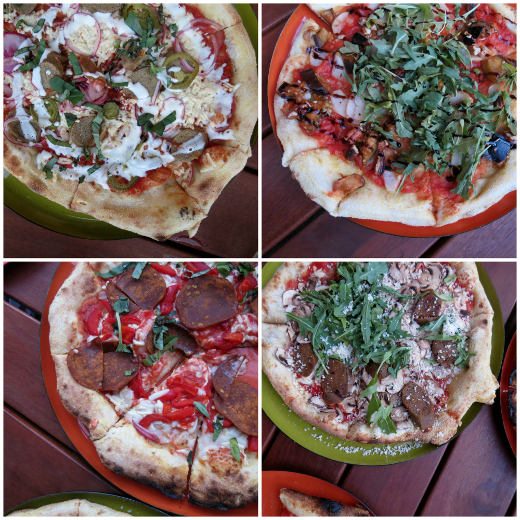 First to the bases: I thought they were excellent, a little bit crispy, but still with a lovely softness to them. The toppings were a bit more of a mixed bag - the classic sausage was universally praised, with a great mix of spiciness, sauciness and chunky mock-meat goodness. The others drew divergent reviews: some people loved the pepperoni, but there were complaints that it lacked spice, while the cheeselessness of the eggplant made it a touch on the dry side for some. The Italian sausage hit the mark pretty well, but didn't quite measure up to the classic. 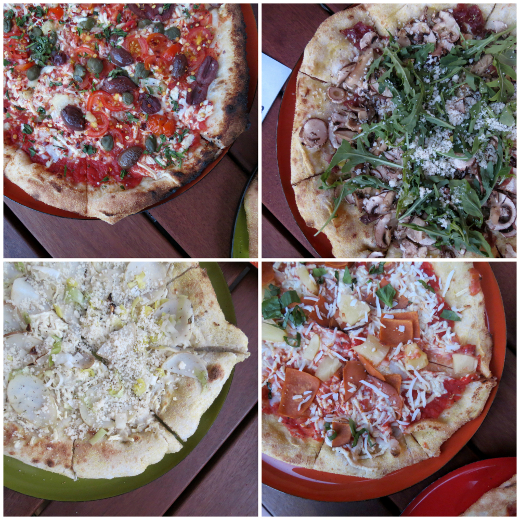 The mushroom and putanesca were both excellent - even if some at our table complained about the amount of rocket on the mushroom - while the bianca was sadly let down by some undercooked potatoes and leeks (it didn't seem like they were pre-cooked, and the pizza cooking time didn't get them as soft as we wanted them). The Jóhannesson, a topical special) was as divisive as pineapple on a pizza usually is - people who like Hawaiian pizzas had no complaints, while the rest of us steered clear. It's other surprise was a scattering of shredded coconut, which was less offensive than it sounds, sprinkled amongst the vegan cheese. 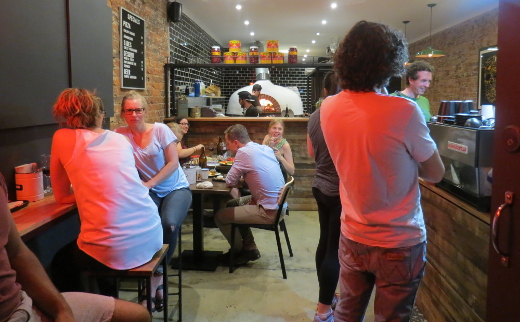 We'd gone too hard on the pizza to try and of their salads or desserts, so there's still more for us to explore on the menu. I was mostly impressed - they're making upmarket vegan pizzas, meaning they're working a very different vibe to the junky Eat Pizza or the over-the-top Cornish. A few people at our table were a bit underwhelmed, but struggled to name a better option for vegan pizza in Melbourne. I reckon they'll work the few kinks out as they go along - there's clearly a huge demand for a vegan pizzeria based on the full house and steady stream of takeaway pick-ups we saw on our visit. We'll definitely return.
____________

Future King and Queen plus Rose & Bean have already reviewed Red Sparrow, and both were very positive.
____________

Accessibility: There's a flat entryway into a fairly crowded interior, plus some tables on the street. Seating is a mix of high stools and regular tables and payment happens at a high counter. The toilets are unisex, but in a pretty inaccessible courtyard out the back.
Posted by Michael at 4:28 pm