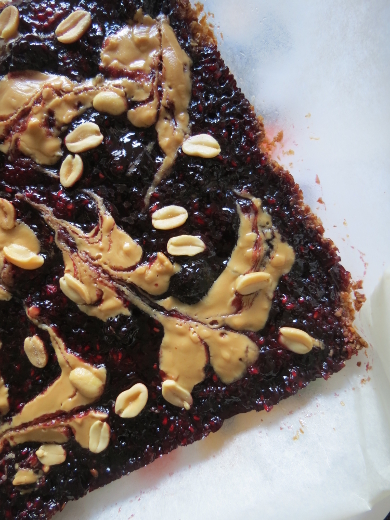 I made this slice specifically for slouching on the couch and sharing with a friend on a Sunday afternoon, and I can't imagine a better setting for it. It's got a biscuity almond & oat base, jammy berry filling, and messy swirls of peanut butter and peanut polka dots on top. Even for those of us who didn't grow up with peanut butter and jelly sandwiches, it's a charmingly childish and comforting snack.

I suspect a lot of ingredients here could get swapped for convenience: rolled oats and almonds could sub out for flours and other nuts, any frozen or fresh berries would do, and what about other nut butters? There is one component that's a bit sensitive, though! I thought keeping my base almonds chunky would be fun, but it just rendered the base greasy with oil and too crumbly to support the slice in our hands. I'll blend all those base ingredients much more thoroughly in future.

No matter - little spoons and plates just enhanced the cocoon we created, a snack-lined safe-haven of pickle-flavoured chips (!), iced tea, craft projects and a few sly episodes of The Good Place. 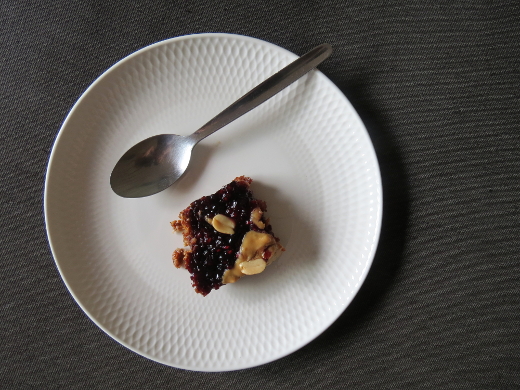 Preheat an oven to 180°C. Line a 22cm-square baking tray with paper.

For the base, place the rolled oats, almonds, salt and sugar into a food processor and blend thoroughly to a meal (I left mine chunky and it was far too crumbly in the finished dish!). Transfer the mixture to a small bowl and stir through the coconut oil. Press the mixture into the base of the baking tray, using the back of a spoon to even it out. Bake for 15 minutes. Turn up the oven to 190°C and bake for a further 5 minutes, until the edges have begun to brown.

While the base is baking, place the jam and berries into a saucepan and set them over medium heat. Stir them regularly while they cook for 5-7 minutes, until they're well combined and pourable. Take the saucepan off the heat.

Turn the oven back down to 180°C. Once the base is cooked, pour over the berry mixture and spread it out evenly. Dab the peanut butter in little teaspoons spotted across the surface. Send the slice into the oven for 5 minutes, then pull it out and drag a skewer or toothpick through the melted peanut butter to create a marbled effect. Sprinkle over the peanuts. Return the slice to the oven for another 10 minutes, until the jam is starting to bubble. Let the slice cool to room temperature over the course of 1-2 hours before cutting it into squares and serving. Store any leftovers in the refrigerator.
Posted by Cindy at 7:24 pm