Dosa Plaza is an unassuming eatery holding up the corner of an apartment complex in Preston, where High St and Plenty Rd fork off. We'd paid only passing attention to it, until a couple of friends invited us to try it out with them after work. Opening and discussing the menu was an excursion in itself - it's all vegetarian and stretches to over two hundred items. Vegan, gluten-free and onion-garlic-free dishes are clearly marked, and there's even a 3-page summary sheet of vegan foods available on request.

This was a journey that started briefly with pasta before focusing on Mumbai chaat, the Punjabi foods found at most Indian restaurants across Australia, and then south Indian delicacies - idlies, vadas, dosas and uttappas. Chinese fusion dosas, Mexican fusion dosas, Indo-Chinese dishes, desserts and drinks. Phew! We tried our best to sample across the board.

A dozen mini-idlies ($8, pictured above left) were an auspicious start, freshly steamed and a little sweet, with plenty of sambar and coconut chutney for seasoning. I delighted in introducing my companions to pani puri ($9, pictured above right): tapping the crispy shells open and carefully stuffing them with spiced potatoes, tamarind chutney and chilli-mint water, then stuffing it all in your mouth at once. 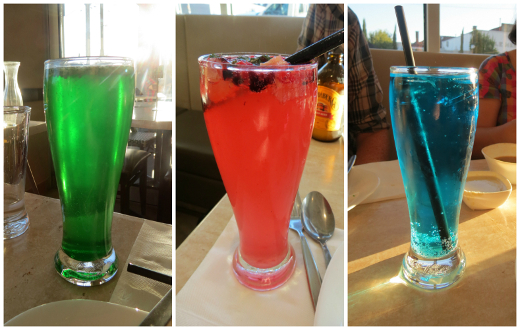 It was after these appetisers that most of our drinks arrived. We heard the tell-tale sounds of Soda Stream carbonation between deliveries of ginger mint lemonade ($5), lemon berry punch ($5) and the Cool Sky mocktail soda ($4.50). They were all as silly and sweet as they were colourful. 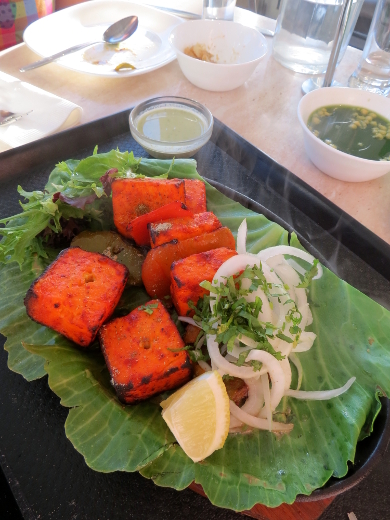 We also enjoyed the hyper-coloured paneer tikka kebab ($10.50), a mild and tender treat with a light, minty dipping sauce. 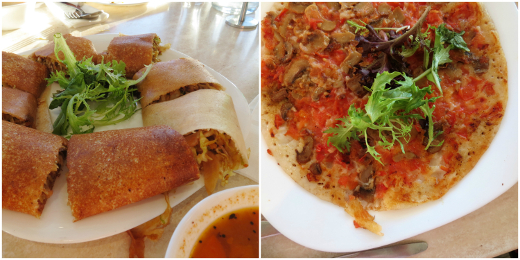 Next we got deep into dosa territory. The spring roll dosa ($13, pictured above left) was not, as Michael had hoped, literally stuffed with deep-fried spring rolls. Rather, the dosa played the role of the pastry, wrapping itself around a very tasty medley of spring onion, cabbage and carrot in sweet soy sauce. It's a ridiculous novelty that actually really works!


Now completely sold on their fusion fancies, we embraced the tomato mushroom uttappa ($11.50) as some kind of pizza, carefully slicing off segments of the pancake and triple-checking that there wasn't any cheese to spoil it for our vegan companion (there wasn't, and she loved it). 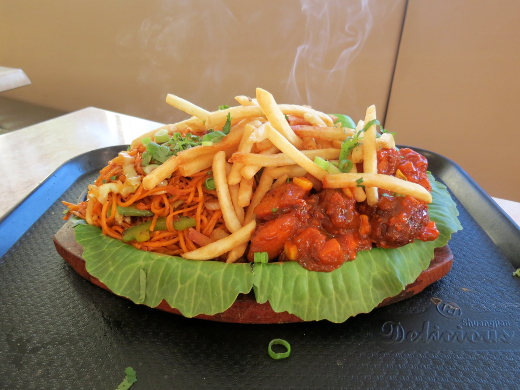 If the meal had a pièce de résistance, it was the Schezwan Sizzler ($16.50). It fittingly arrived last, sizzling and steaming and bursting with foods we never dreamed of combining. Vegetables and mini-idlies were stir-fried in a hot and sweet sauce, paired with a mountain of orange noodles fried with green vegetables, and all topped with French fries. It was monstrous, it was magnificent, it is surely a worthy successor to the halal snack pack. 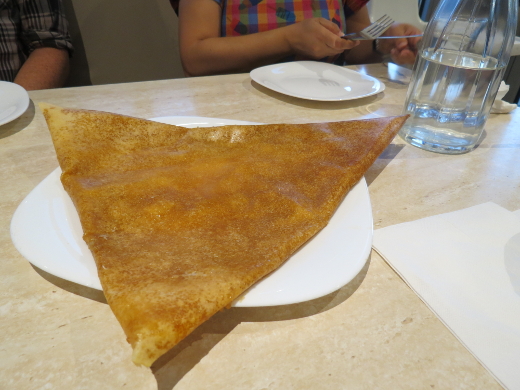 Giddy with the spectacle of it all, we couldn't walk out without dessert. The sweet coconut dosa ($7.50) was stuffed with shredded coconut and jaggary, reminding me of a chewy, caramelised ANZAC biscuit in the best possible way. 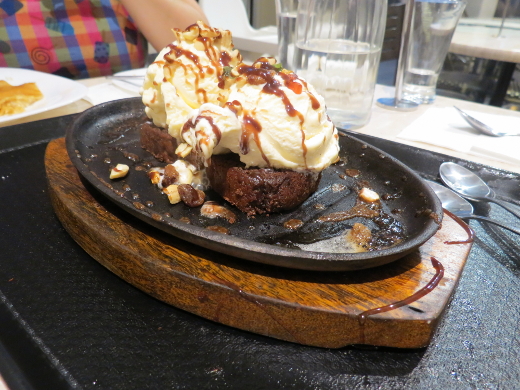 I think the showpony of the sweets is surely the brownie sizzler ($9.50). The cake is a mild one that wouldn't impress on its own. Yet its mild flavour was perfect for dressing up on a hotplate with icecream, fudge sauce, sultanas and nuts. (I only ever knew about cakey-fudgy brownie profiles, who knew that sizzling was even an option?!) 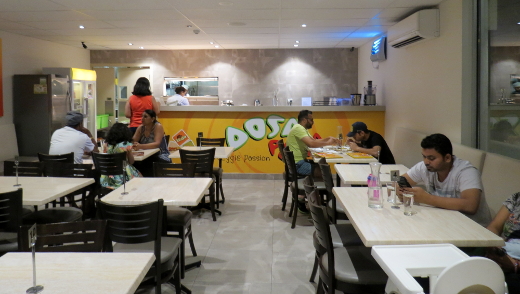 We left Dosa Plaza near-delirious. Its flouro-lit fit-out is nothing special, but it's the home of some preposterous fusion foods, many of which we really enjoyed and would order again. With everything from $6 snacks to $16 sizzlers it caters to a variety of appetites, if only you can figure out which part of the enormous menu to order from.


Dosa Plaza Preston has previously received a positive review on quinces and kale.
____________


Accessibility: Dosa Plaza has a flat entry and well-spaced tables. We ordered at our table and paid at a high counter. We didn't visit the toilets.
Posted by Cindy at 10:32 pm