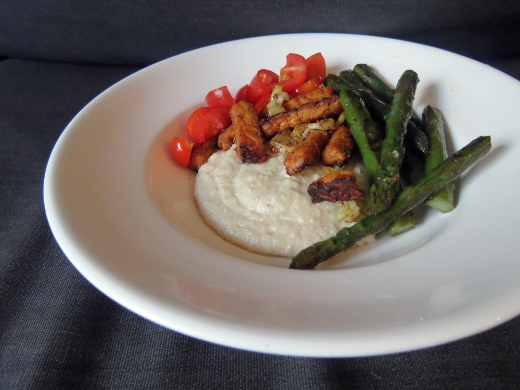 I was very curious about grits when I read about them in Vegan Soul Kitchen. What's their texture and flavour, and would I ever be able to find them in Australia? I was able to answer the first two questions in Washington DC earlier this year: grits are corn-based and a bit like soft polenta or even mashed potato in their fluffy starchiness, with the velvet grains of a creamy risotto. Last month my friend Erin helped resolve the last question, picking up a box of Quick Grits for me (at the cost of only a few dollars) when she stocked up on Halloween candy at USA Foods. 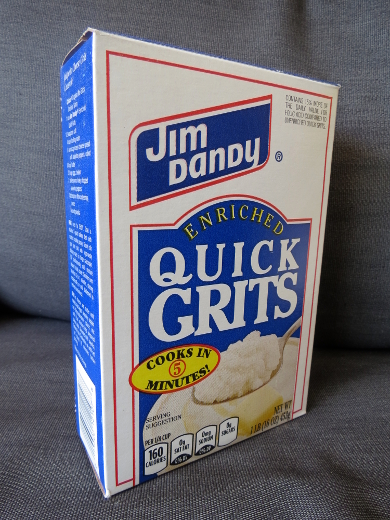 Although the box cheerfully promised that these cook in 5 minutes, I found that my Quick Grits were also well suited to the near-hour-long simmer included in this recipe of Bryant Terry's. Rather than using butter or cream, Terry enriches his grits with blended cashews. They really round out the texture, providing a creamy and mild foundation for the real flavour bomb: spiced tempeh.

Terry's dish is inspired by the more classic combination of shrimp and grits (which I recall the team selling at that market in DC). In this vegan recipe, Terry has us fry up bite-sized strips of tempeh and coating them in hot and sweet dry spices. They're stirred together with sauteed leeks and fresh cherry tomatoes, which provide a little sweetness and some much-needed juiciness. Two of my dinner companions aren't tomato-lovers, so I served those separately and prepped some of Bryant Terry's rosemary-salted asparagus as well. If I were cooking this purely to please myself, I reckon I'd toss the cherry tomatoes into the saute pan with the leeks for just a couple of minutes, so that they were warmed through and just starting to soften.

This recipe served four people without any leftovers, to our chagrin. It shouldn't be too hard to double (perhaps frying the tempeh in two batches). I reckon we might give that a shot, given how much we loved our first experience of home-made grits.


Make a small, early start on the grits. In a small bowl or airtight container, soak the cashews in 1/2 cup of the water for at least an hour. Drain the water and reserve the cashews.

Next, focus on the tempeh. Slice the tempeh into pieces about 1cm thick and 3-4cm long. In a large saucepan, mix together the stock and half of the salt and drop in the tempeh pieces. Bring them to the boil, then turn down the heat to simmer the tempeh for 25 minutes. Turn off the heat and take out the tempeh with a slotted spoon; reserve the stock for the grits.

While the tempeh is boiling, find a heat-resistant and airtight container big enough to fit all the tempeh pieces. In the bottom of it, stir together the onion powder, garlic powder, paprika, chilli powder, chilli flakes, cayenne, thyme, oregano, white pepper, and 1/4 teaspoon salt. Set aside for later.

While the tempeh is boiling, there's probably also time for preparing the grits further. Blend together the cashews and 1/2 cup fresh water in a food processor or blender, until as smooth and creamy as possible. Set aside.

Slice the cherry tomatoes into halves and place them in a bowl. Stir in the lemon juice and 1/4 teaspoon salt and let the flavours mingle.

Finely slice the tender parts of the leek and discard the rest. Mince the garlic. Set a frypan over low-medium heat and add the olive oil. Add the leeks and saute for 5 minutes, until softened. Add the garlic and keep sauteing until everything is tender and fragrant, perhaps another 10 minutes. Turn off the heat and set aside.

Now it's time to get the grits going properly. Bring back that big saucepan of stock. Add the extra cup of stock and 1 cup of water to the stock already in there. Whisk in the grits until there are no lumps, and bring it all to the boil. Turn the heat down to low and simmer the grits, stirring regularly,  until they've absorbed most of the liquid, 10-12 minutes. Stir in the almond milk and simmer for a further 10 minutes, still stirring regularly to prevent the mixture from sticking to the bottom of the saucepan. Stir in the cashew cream and last 1/2 cup water and cook, stirring regularly, for 35-40 minutes. The grits should be soft but not runny, like soft polenta.

While you're simmering the grits, get a frypan on the heat with the tempeh's olive oil. Fry the tempeh until golden brown, turning at least once as it cooks. Turn off the heat and transfer the tempeh to the container full of spices. Pop the lid on and give it a thorough shake, so that the tempeh is coated all over in the spices. Drain the juices off the tomatoes and mix them up with the sauteed leeks and spicy tempeh pieces.

When everything's ready, spoon a big thick puddle of grits onto each plate or bowl, then top with the tempeh mixture.
Posted by Cindy at 10:20 am