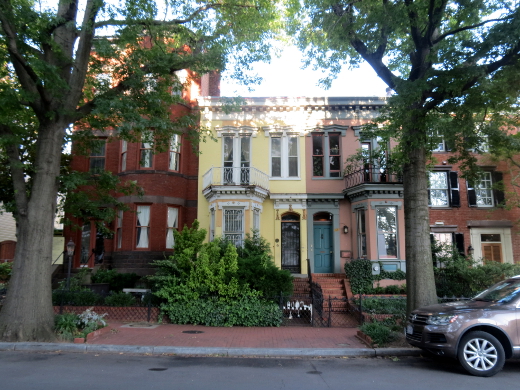 As my week in Washington went on, I ventured a little further on foot and via the Metro. This allowed me to track down some of the more hip veg-focused eateries hidden around the city.
____________ 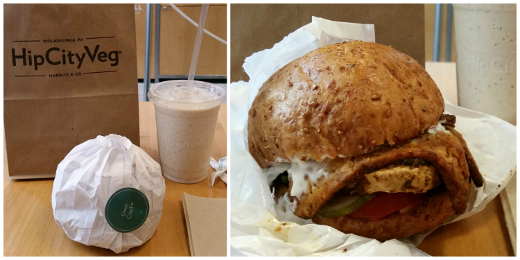 The first was the aptly-named HipCityVeg, an all-vegan burger joint near Chinatown. It's light and bright, with an emphasis on nutrition, sustainable practices and keeping it cruelty-free. The burgers are based around mock meats, mushrooms or tofu, fries are made from sweet potatoes, and their kale lemonade is promoted over the modest range of sodas.
I got myself acquainted with a Disco Chick'n burger (US$9.55 ~ AU$12.75). I loved the sturdy multigrain bun, bit o' spice on the mock chicken, smoked tempeh strips, pickles, soy mayo, lettuce and tomatoes (and picked out what little raw onion was included). It was the fun kind of messy, not turning soggy or disintegrating completely.
My soy-based vanilla milkshake (US$5.65 ~ AU$7.55) was sweet and slushy. I could barely believe that its packaging was compostable, but everything served at this eatery is!
____________ 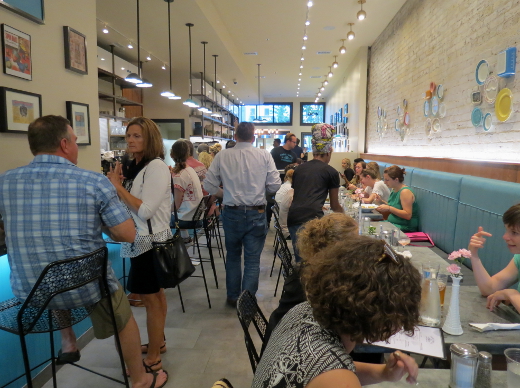 My one wish-list eat for the trip was Fare Well, a vegan bakery, diner & bar that had only been open a couple of weeks (lucky for me a DC mate mentioned it on facebook!). It turned out to be a pleasant 20 minute walk from my hotel so I visited two nights in a row, first with a couple of friends and then again on my own. 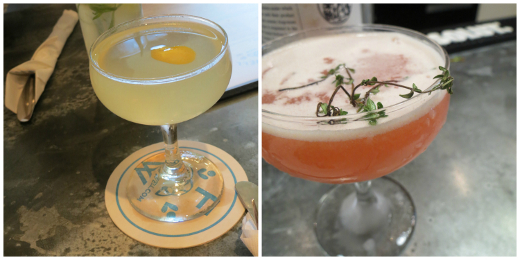 First, the bar. Fare Well has an experienced bartender who's put together a nice cocktail menu (US$11 ~AU$14.70 each) including some housemade specialties with local names. The Tiber Creek (above left) was citrussy and brutally boozy, but not quite as complex as the passionfruit/ginger/lemongrass/grapefruit ingredients going into it. The Queen of H Street (above right) was raspberry-wrapped vodka, shaken with an egg white substitute (I asked the bartender if it was aquafaba, but he said they had better results with soy lecithin! Huh). 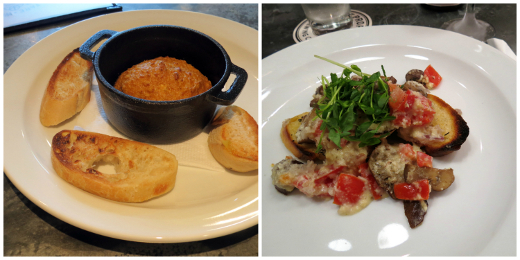 Onto the diner options, which include breakfasts, small plates, mains and desserts without time restrictions. The Buffalo cauliflower dip (US$8 ~ AU$10.70) had a nice cashew creaminess and tender cauliflower florets that squished nicely on the (too few) toasts. On my own, I treated the mushroom scampi appetiser (US$8 ~ AU$10.70) as a leaving-room-for-dessert dinner. It echoes the same cashew cheese on toast theme, but was made more complex with sauteed mushrooms, capsicum, a smear of garlic and a smattering of fresh greens. 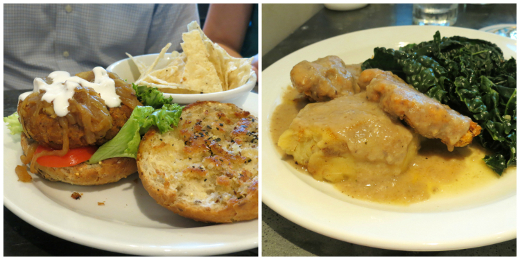 My friend Matt tried the mushroom-chickpea burger (US$14 ~AU$18.70) and was positive but not effusive in his feedback. The seitan platter's (US$14 ~AU$18.70) presentation suffered for how pale and gluey American gravy always looks - it smothered some nice Southern-fried seitan cutlets and a no-longer-crispy potato cake, balancing it all out with sauteed kale. 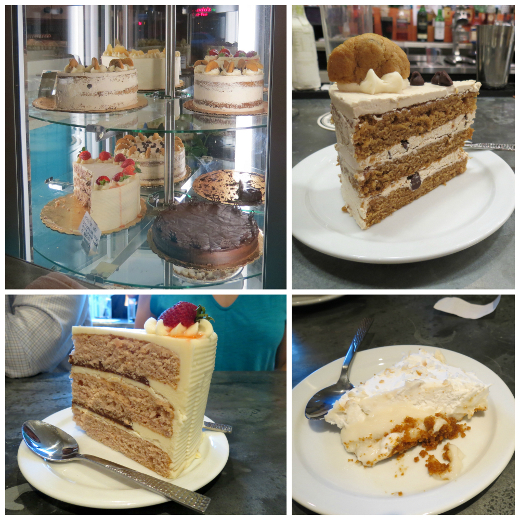 Finally, the bakery. Fare Well has a gorgeous range of baked goods available to take away or eat in - the layered cakes (US$8 ~ AU$10.70) are especially striking, with a dense crumb and sculpted buttery frosting. My friends were impressed by the Neapolitan version (pictured bottom left), which was clearly based on real strawberries and not dependent on food colouring. Out of curiosity, I tried a cookie dough cake (pictured top right) and enjoyed the light caramel flavour and scattered chocolate chips. The coconut cream pie (pictured bottom right) seemed constituted of a can of coconut cream whipped with sugar (fitting, I guess).
Fare Well has a bright atmosphere and great menu - I enjoyed both sharing it with friends, and sitting alone at the bar with a book. Nothing disappointed but, equally, nothing really wowed me. I reckon Melbourne's best vegan food more than matches it. 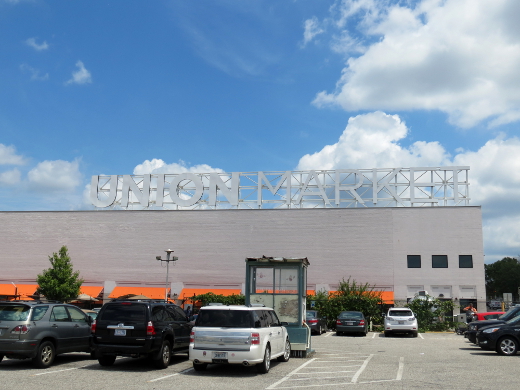 Though Union Market boasts of its long history, it's a very current-day enterprise too. It's not really a spot for accomplishing your weekly shopping or picking up boxes of cheap, seasonal produce. Rather, it's all about fancy cheeses, home-made kimchi and homewares that belong in goop. 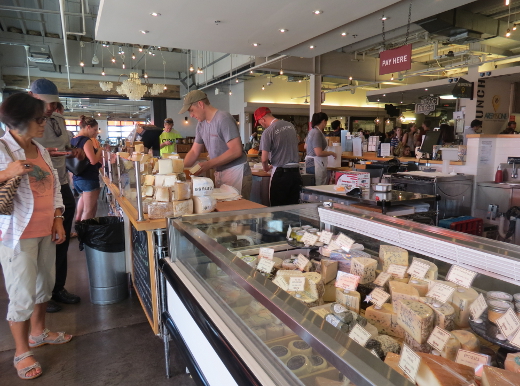 The market is even more heavily dominated by stalls designed for eating in, with the astroturf and picnic tables reminding me of Melbourne's food truck scene. I did a long circuit of the building, trying to decide whether I wanted a crepe, tofu taco, dosa, or just fancy icecream for lunch, ... 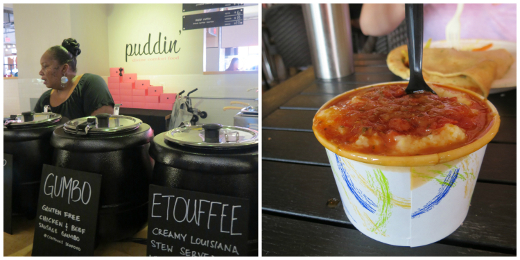 I started out with parmesan cheese grits from puddin' (US$5 ~ AU$6.65), served with a little tomato-butter sauce. Contrary to the name, I found grits to have the soft bite of rice pudding and fluffiness of mashed potatoes - definitely a starchy comfort food. (They make a handy benchmark for making my own grits from Vegan Soul Kitchen.) 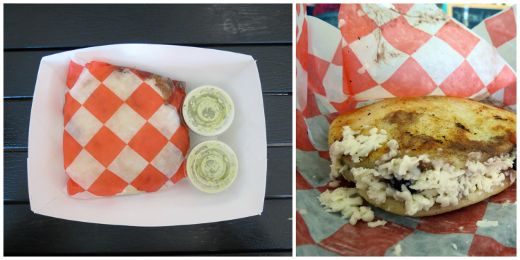 Next I moved on to Arepa Zone. The Dominó arepa (US$6.50 ~ AU$8.65) was deceptively cute and compact in its checkered wrapper, unravelling into a delicious mess of saucy black beans, queso fresco and toasted corn. 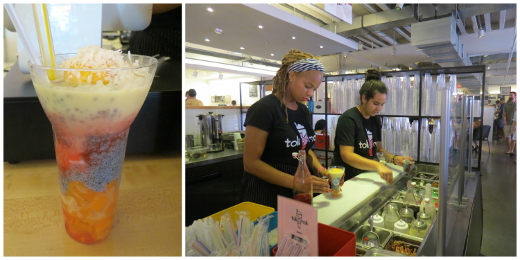 Finally, Sarah introduced me to toli moli, which she said was the new dessert craze. These layered desserts are based on south-east Asian falooda, and I initially mistook them for variations on the Malaysian cendol. All the toli moli creations seem to centre on basil seeds, then bring together fruit pieces and jellies, icecream and milk on a flavour theme. I tried their vegan Mango Mogul (US$7.99 ~ AU$10.60), with fresh mango and sorbet, turmeric almond "melk" and flaked coconut. It was a lot of fun but on a hot, humid day I wished that more than just the sorbet had been stored cold.
____________ 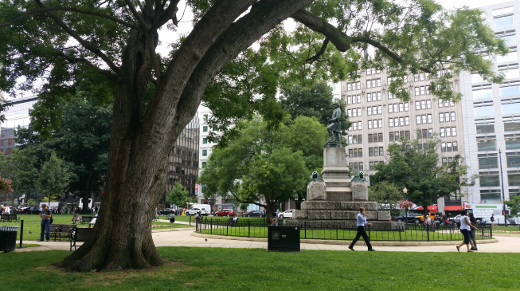 Exploring the veg eats around DC was a great motivation for walking the streets and visiting neighbourhoods I had no other reason to be in. I ate extravagantly, and by the time I was done I looked forward to the simple granola bowls, salads and toasties that I subsisted on one week later in the country.
Posted by Cindy at 6:16 am