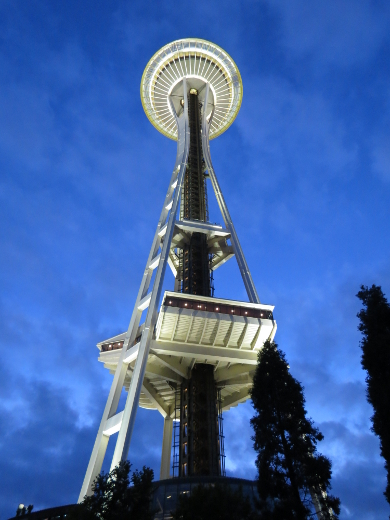 Hello from the U S of A! I'm visiting four places for a week apiece for work reasons, and finding scraps of time around that for sight-seeing and fun eating. My first stop has been Seattle, a new city for me. I was based in the U(niversity) District, which had a relaxed school's-out-for-summer atmosphere and affordable, veg-friendly restaurants. Here's a run-down of the exclusively-vegetarian places I checked out. 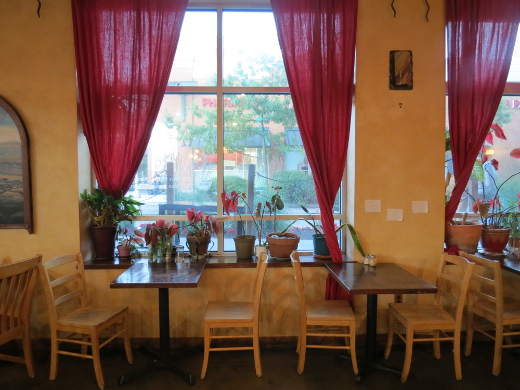 I arrived on a Saturday evening - the late sunlight allowed me time to shower and get my bearings, then settle in for a modest meal at Chaco Canyon Organic Cafe. With mosaics on the walls and sprouts on the menu, this place has clear hippy roots. It offers the distinctly American suite of soups, sandwiches and salads, plus some bowls and breakfasts. There's French toast and a little seitan, but the vibe is overwhelmingly wholesome.... just what I needed after 26 hours of airports and planes. 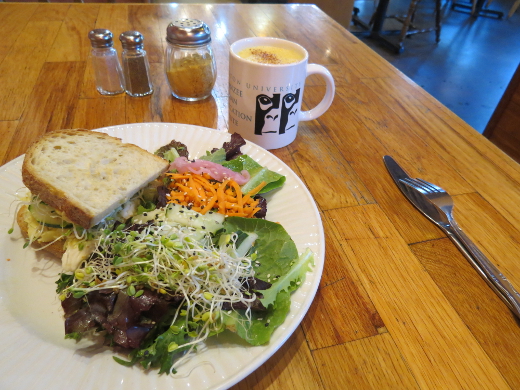 I tried an Artichoke Melt half-sandwich (US$10.20 ~ AU$13.60), a comforting savoury concoction of artichoke pate, vegan cheese sauce, veganaise, cucumber and sprouts between slices of lightly toasted and perfectly unAmerican sourdough bread. It was served with a big house salad full of leafy greens and sprouts lightly dressed in an apple garlic vinaigrette. To drink, I nursed a mug of hot apple cider (US$3.85 ~ AU$5.10), an apple juice spiked with ginger topped with frothy pulp and cinnamon.
____________ 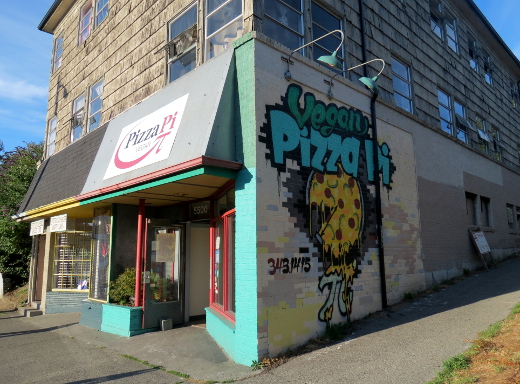 By the next night, I was ready to embark on something more uniquely American. I found it at Pizza Pi, a vegan pizzeria located at the northern end of the restaurant strip on University Way. It's intended for take-out more than eating in, but my two game non-veg companions and I were able to grab a flour-dusted table and settle in 'til closing time. 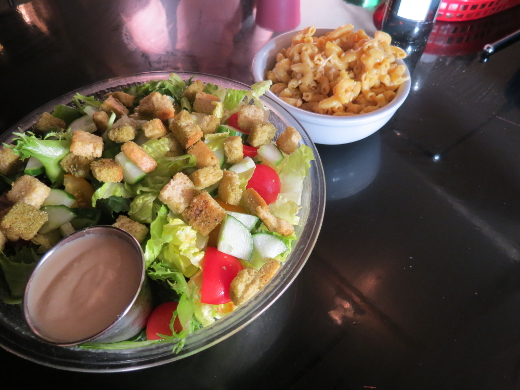 As is usual here, the salad came out before the mains - this large house salad (US$6.75 ~ AU$9.00) was based on lots of greens, and was dotted with tomatoes, cucumbers and some great crunchy croutons. We picked the honey mustard dressing and dabbed at it judiciously. 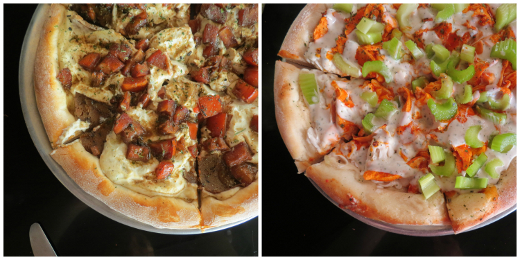 As for the pizzas, the range is somewhat overwhelming and tends towards the outlandish and the mocking. Phoni-pepperoni, Aloha, Indian Curry, BBQ Chicken, and even a mac'n'yease pizza... it was tough to choose. (I didn't even entertain the appetizer, sandwich or calzone options!) My second co-diner went with a small Bruschetta Delux (US$8.25 ~ AU$11.00) and I was really impressed by its thick layers of white garlic sauce and cashew ricotta topped with a piquant bruschetta tomato mix and a little sliced field roast.

Its lurid orange-green counterpart up there is the saucy and spicy Buffalo Chicken pizza (US$8.25 ~ AU$11.00). Here the white garlic sauce was overwhelmed by the Buffalo-style chicken and a pourover of ranch dressing. Fresh celery pieces are true to the theme, but didn't really appeal to me as a pizza topping.
____________ 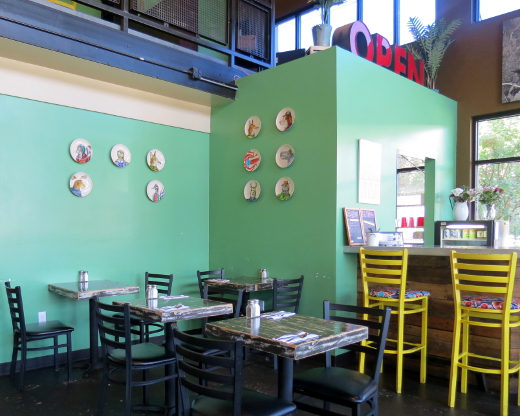 As well as Pizza Pi, Seattle obsessive @dimsimkitty recommended Wayward Vegan Cafe. It was a longer walk away from my base, but I gladly made it twice. This diner is lodged in a boxy commercial building but the internal soundtrack of Elastica, The Breeders and Hole assured me that I had definitely come to the right place. Wayward boasts another enormous menu: several dozen different breakfast fry-ups, over a dozen sandwiches and subs for lunch, plus salads, bowls and miscellaneous other plates for dinner. 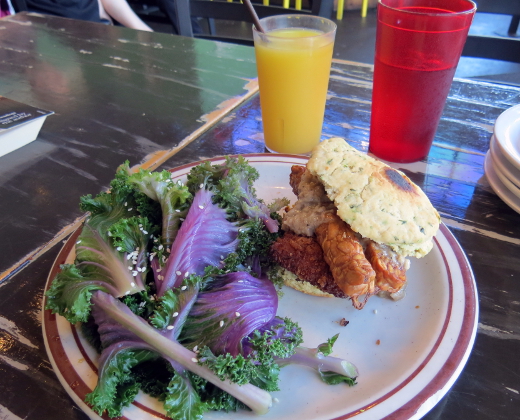 For my late, large breakfast, I focused on the fact that they do American biscuits (8 ways). The Backwoods Biscuit Stack ($9.00) was really a big fat sandwich made from a fluffy herb biscuit and stuffed with a small vegan omelet, crumbed 'chiggen', strips of tempeh bacon and country gravy. It was all very salty, and I was glad for the equally-enormous side of garlic steamed greens. A couple of days later I returned for a late lunch. They were all outta ribs so I satisfied myself with a Wayward Burger (US$9.00 ~ AU$12.00). The accompanying French fries were tired and floppy, and the burger had a nicely charred patty but was similarly lacking liveliness. The staff kindly comped my drink after I had to wait awhile for my meal. While the Wayward menu holds a dazzling array of vegan diner foods, the execution seems uneven - for me, it was worth it for the biscuit.
____________ 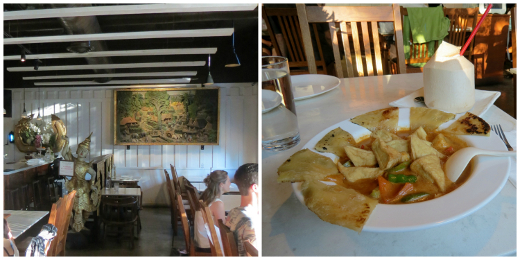 My final veg-specific stop was at Araya's Place, a vegan Thai restaurant I'd spotted nearby Pizza Pi. It's got the fried noodles and rice, green & red curries and spring rolls we've all come to expect, plus a few interesting additions. The appetiser list goes pan-Asian with Chinese leek-stuffed rice cakes, pot stickers and veggie tempura; there's a fried Brussels sprout salad, and curries containing mango, avocado or banana.

I bravely took on the latter option, a Massaman Banana Curry (US$13.95 ~ AU$18.60). The few banana chunks noticably infused the sweet-and-sour coconut sauce, and I enjoyed sifting through it for fried tofu slices, decoratively sliced potato chunks, capsicum and peanuts. Unfortunately the accompanying roti was woefully undercooked, little more than rolled-out dough without a sliver of flakiness.
____________
Though the meals were mixed, I had fun exploring the veg-focused eateries of the U District. They fortified me for some long work-days and scattered city sight-seeing, including a night at the Spaceneedle and another viewing a Wearable Art exhibition at the EMP Museum.