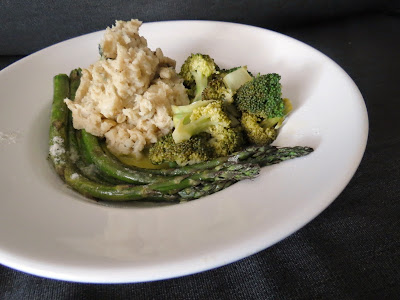 We had a relatively quiet Sunday with plenty of time for cooking, so we decided it was time to revisit Vegan Soul Kitchen several times over. Our initial attempt had been a mix of excellence (the veggies) and adequacy (the tofu), so we focussed our attention on more vegetables this time around.

Our planning was partly dictated by our veggie box leftovers, but we managed to pull together a complementary set of dishes: chilled citrus broccoli salad, rosemary salted asparagus and cumin-cayenne mashed potatoes with caramelised onions. The first two were super easy: a quick blanch of the broccoli and some dressing for the first and simple roasted asparagus with a ground up mix of salt and rosemary for the second. They were great too - I didn't chill the broccoli enough so it wound up cooking itself a bit in the dressing while it was marinating, but it was still zingy and crisp, while the rosemary-salt (pictured below) added some nice flavour to roasted asparagus (which is already pretty great). 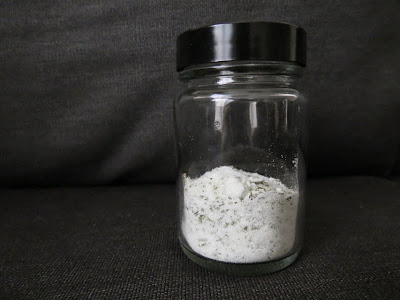 The real star of the show though was the mash, so we're including the recipe below. It's not particularly complicated - the onion caramelises while you're boiling the spuds and then it's just a judicious mix of spices and soy milk to add flavour and creaminess. But the end result is greater than the sum of its parts - we cooked up a bit less than the 1kg in the recipe below, and we were both scraping the dregs out of our bowls wishing for more.

We will definitely be making this recipe again and I'm excited to keep digging through this book for more great dishes.


Place the potato chunks in a large pot covered with cold water and bring to the boil. Cook for 20-25 minutes until the spuds are soft.


In the meantime, combine the olive oil, onion, cumin, cayenne and a few pinches of salt in a frying pan and cook over low heat, until the onions are soft and caramelised - about half an hour. Add the soy milk and thyme to the onion mix and stir through.


Drain the potatoes and return them to the saucepan, mashing them until relatively smooth.


Combine the soy milk/onion mixture with the potatoes and whip the mix together, until the mash is light and fluffy - about a minute. Season with salt and pepper to taste and serve.
Posted by Michael at 8:40 pm