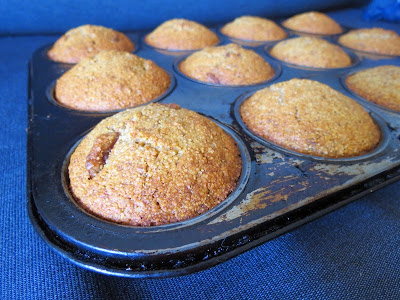 I'm launching right into a second banana-based baking recipe here. This one's appeal was threefold: it'd do away with another frozen banana (of course), produce a packable snack for workday afternoons, and expand my experience with Vegan Soul Kitchen. 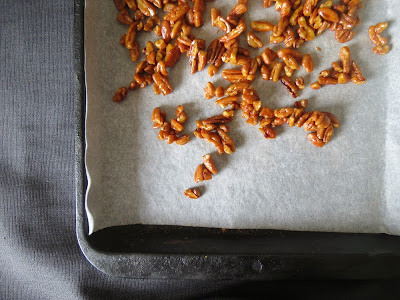 Bryant Terry's description of these muffins hit my snacking marks: "not quite a dessert" with "light, sugary" banana-bound cornbread offset by "earthy-sweet" maple-coated pecans. The pecans have earned a stand-alone recipe page in the book for good reason - they're a lovely little candy that might not make it into the muffin batter if you taste them first. Luckily I made a few extra because I couldn't stop at five, let alone one. 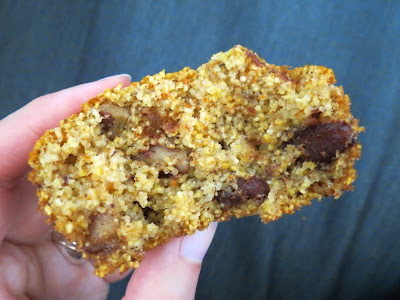 And actually, I found that their maple coating got a little lost in the muffins - I wonder if plain pecans would do the job just as well. I did go ahead and adapt the batter for convenience, using sunflower instead of corn oil, topping up my wholemeal flour with a little spelt, and replacing rice milk with almond milk.


A bigger unknown was using polenta as the 'yellow cornmeal'. Southern USian and Central American cooking traditions use a broader range of corn products than are easily accessed here in Oz, and I've no idea whether polenta behaves as intended in this recipe. It remained sandy and crunchy in the baked muffins - consistent with Bryant Terry's description but coarser than the cakey cornbreads I've eaten in other contexts. I wonder if a little resting time for the batter would help the cornmeal soften and soak up moisture before baking.


I'm keen to learn more about all things corn. This book's affection for corn grits might finally propel me to USA Foods where candies and hot sauces have thus far failed.


Preheat an oven to 180°C. Line a large baking tray with paper. Roughly chop the pecans and spread them over the baking tray. Toast them in the oven for around 4 mintues, stirring them at the 2 minute mark.


In a large bowl, stir together the polenta, plain and wholemeal flours, sugar, baking powder, bicarbonate of soda and salt.


In a small bowl, thoroughly mash the banana. Whisk in the maple syrup, the oil and finally the almond milk. Pour this liquid mixture into the large bowl of dry ingredients and stir them together until just combined. Fold in the cooled pecans. 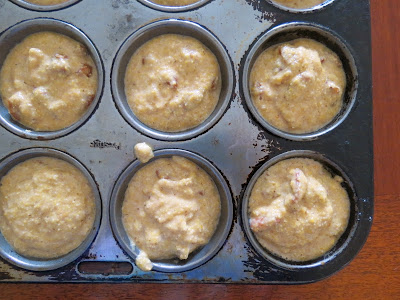 Spoon the mixture into the muffin tray and bake for around 15 minutes, until the tops are golden and the cakes are just cooked through. 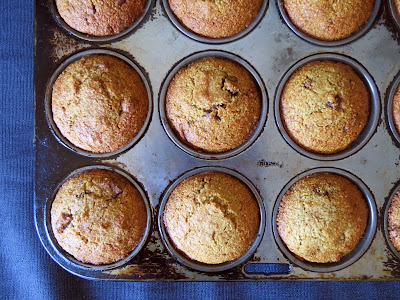