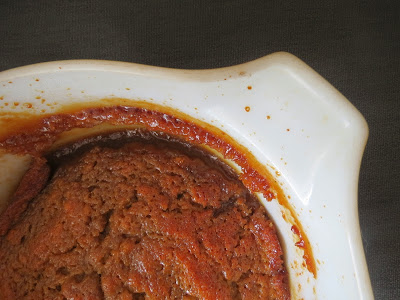 I've been accumulating bananas in the freezer and wondering what to bake them in. I wanted to make this sticky banana pudding while Michael was away travelling but I can't find the recipe online anymore - and boy howdy, have I looked. It was after my latest failed search that I let it go and started researching alternative versions. There are actually plenty of self-saucing banana puddings out there that my fond memories prevented me from noticing.


I went with a Bill Granger recipe posted on fuss free cooking. I knew it wasn't the same as my ol' fave - I remember there being butter and/or cream in the butterscotch sauce - but if anything that made it simpler to prepare. Given that mashed banana is a common egg replacer in vegan baking, I doubled on the fruit and cut down on ingredients in the process.


Pouring a watery syrup over the cake might look weird, yet I trusted it would work (I've done this once before). Granted, it's not as buttery as the original, but this butterscotch sauce thickens and pools in the bottom of the dish and leaves sticky caramel on the edges of the cake, just as it should. The pudding is very, very sweet and I'll try reducing the sugar in the cake down to 70g or so next time I bake it. Fresh from the oven the pudding is cakey and almost light; after a day in the fridge it tends toward dense and fudgy. It's a treat either way.


Preheat an oven to 180°C. Lightly grease a baking dish


In a large bowl, beat together the butter/margarine and the castor sugar until fluffy. Beat in the mashed bananas and vanilla until thoroughly combined. Sift over the flour, baking powder and salt and gently beat it in, gradually adding the milk as you go. Pour the cake batter into the baking dish.


Place all the sauce ingredients in a small saucepan and bring them to the boil. Gently pour the sauce over the cake batter. Bake the pudding for 30-40 minutes, until the cake is cooked through.
Posted by Cindy at 9:01 am