Vegan soul in a bowl 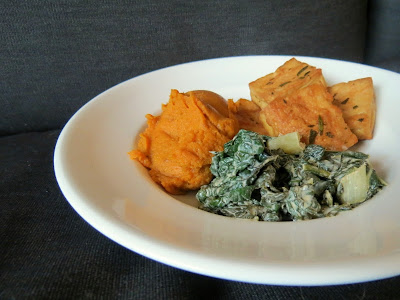 Australia's experience of soul food has been pretty shallow, on the whole. A few years ago we might have been able to nominate fried chicken or collard greens as soul food staples, and now there's no end of Melbourne bars and restaurants serving up cornbread, mac'n'cheese, hush puppies and pork fat everything. But you'd be hard-pressed to learn much of this cuisine's roots, deeply entwined with African-American history. There's a context of slavery, African and Native American ingredients, home gardening, game meats and offal, and a spirit of sharing and making the best of what's on hand.


I was struck by this sense of generosity and family connection when we visited soul food restaurant Seasoned Vegan in New York back in June. Like the Seasoned Vegan team, Bryant Terry has been reinterpreting soul food for the contemporary vegan, though he tends to leave the mock meat and dairy aside and prioritise sustainable whole foods. (Here's a great article where he fondly recalls the home-grown produce and seasonal cooking traditions in his grandparents' neighbourhood.) I recently acquired a second-hand copy of his book Vegan Soul Kitchen and it's been fascinating to flip through some really unfamiliar recipes, drawing together spices and produce in ways that I haven't tried before.

We tried out three of these recipes for dinner on a Sunday night. This wasn't quite the ordeal it sounds - the preparation methods aren't too fussy, and we scheduled the oven and stove times well. The main protein was tofu, drizzled with a little oil, paprika and fresh rosemary before baking. I was impressed with the golden crust it developed but the spices just didn't carry; I'll have to try tinkering with the quantities here.

We had better success with the sweet potato puree - fluffy yet filling and very, very sweet. It played well with the chewier and more acidic lemon tahini-dressed chard and spinach. I reckon we'll be making these two recipes again - as a sweet-and-sour team, mixing and matching with other Vegan Soul Kitchen dishes, and perhaps even integrating them into our other cooking habits.


Place the sweet potato chunks in a very large bowl. Toss through the agave nectar, coconut oil and salt. Spread the potato chunks out over a large high-walled baking dish and roast them for 30-40 minutes, giving them a stir at 10 minute intervals. Let the potatoes rest for 10 minutes or so. Puree the sweet potatoes and coconut milk in a food processor until smooth, working in batches if necessary.

Whisk all the dressing ingredients together, by hand or in a food processor.

Set a large frypan over medium heat. Cook the chard stems for a couple of minutes, then add the chard leaves, and after a few further minutes the spinach leaves. Stir them often, cooking until everything is just wilted. Transfer the greens to a bowl (if there's water in the frypan, hold it back from the bowl). Pour in the dressing and toss it through the greens.
Posted by Cindy at 8:11 am