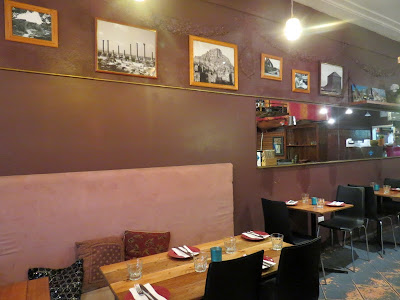 We were hitting a Wednesday night gig in North Melbourne and were on the lookout for somewhere new to eat in the neighbourhood. There doesn't seem to have been a boom in exciting veg-friendly places in the area, but Agraba turned up in a few google searches and it seemed like it was worth a visit. It's a cute little joint - they've got records playing, old photos of Turkey on the walls and a sunny area out the front. We tucked ourselves inside and perused the menu, finding loads of vego mezze dishes to choose from - they don't label things as vegan, but I think everything we wound up ordering would be dairy free.

We somehow resisted the crumbed and fried haloumi ($9.9) and settled on a few healthier dishes. The arnabeet meklieh ($9.9) was a simple dish of fried broccoli and cauliflower with a side of tahini sauce and a squeeze of lemon. I was in the mood for some proper vegetables, so it hit the mark nicely for me. 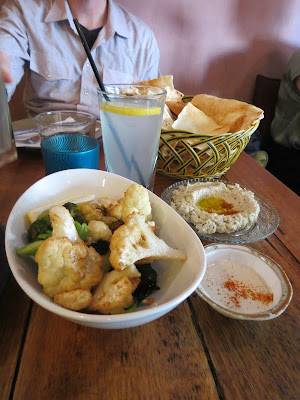 Next to it is the baba ghanoush ($9.5), as smoky and eggplanty as you could hope for, with plenty of fresh pita bread for dipping.

Our other vegetable dish was the loubia ($9.9), sauteed green beans with olive oil, coriander and tomato. I don't remember the coriander having a strong impact, but the beans were oily and delicious anyway. 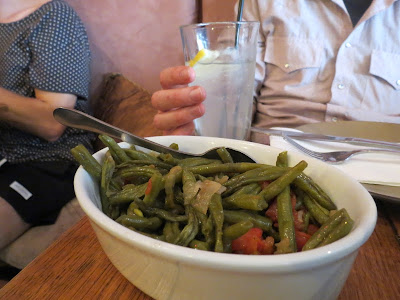 We couldn't resist trying a plate of their felafel ($10.9), with pickles and tahini sauce. These were a pretty respectable effort - crispy on the outside and loaded up with herbs and spices. They're not going to challenge Half Moon or Mankoushe, but they're not going to leave you disappointed either. A plate full of pickles always goes down well with me too. 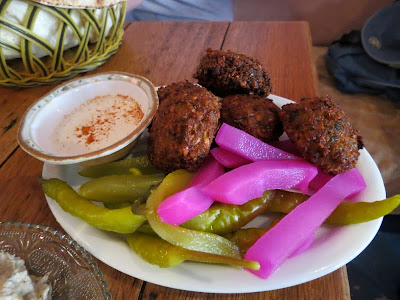 Agraba worked out pretty well for us - it's reasonably priced and tasty food, with plenty of vegetarian (and vegan) options and a pleasant atmosphere. Throw in the delicious house made lemonade (with rosewater!) and friendly staff and you've got a solid local restaurant - it's well worth a visit if you're in the neighbourhood.

Nouveau Potato, Off The Spork and BirdseyStreet all enjoyed the food at Agraba - it's surprisingly under-blogged.
____________

Accessibility: There's a flat entry into a pretty crowded interior. They do full table service. We didn't visit the toilets.
Posted by Michael at 3:35 pm