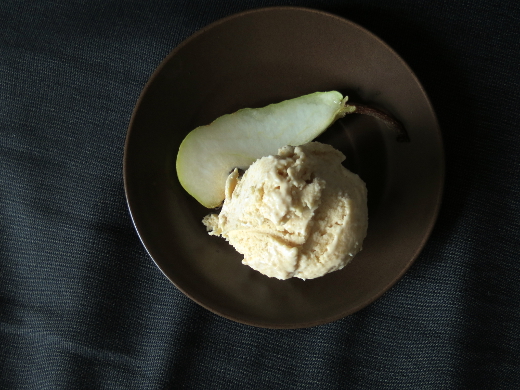 Last week I enthusiastically renewed our vege box order with CERES.... except that I actually ordered an all-fruit box instead of a mixed fruit & veg box. We were beset by multitudes of bananas, apples, kiwi fruits, oranges and grapefruit, more than a dozen mandarins, a couple of limes and four pears. We've been working through them - stirring the limes into creme fraiche for sweet potato wedges, packing apples into our bags for work and punctuating our days at home with mandarin peeling. I made a big batch of rice pudding to enjoy with the kiwi fruits and some apple & walnut pancakes once, too. The bananas are only just ripe now.


Three of the four pears went into this David Lebovitz icecream recipe, prepared for dessert when we had some friends over. They're cooked in caramel, blended smooth, then strained and churned into a rich, velvety scoop. The caramel procedure, which I've used for salted caramel icecreams, always gets me nervous - it teeters on burning in some spots while others wait their turn to melt. The flavour in the mixture stayed just on the right side of bitter and mellowed out a lot during churning and freezing. The pear ended up playing subtle too - sweet and fruity pre-churn, later forming flecks of texture and leaving just a whisper of flavour. It was rather upstaged by the excellent chocolate self-saucing pudding that one of our guests brought, and we've made a point of eating the leftovers without that kind of delicious distraction.


The most striking feature of this dessert was the 48% milk fat cream that I used. It made for a rich, languorous icecream that was easy to scoop and didn't melt, even after half a hour of sitting at the table, waiting for us to serve seconds.

Peel the pears and remove their cores. Dice them up finely.


Place the sugar in a medium saucepan and set it over consistent medium heat. Given enough time, the sugar will liquefy and turn brown. You can use a wooden spoon to gently shift the unmelted sugar towards the heat.


When the sugar has entirely melted to amber caramel, add the pears. A bunch of the caramel will seize up around the pears, but don't worry about it - just keep stirring the pears into the caramel and allowing the sugar to melt back down. Let it all to cook, stirring regularly, for about 10-15 minutes, until the pear is tender.


Turn off the heat and add the cream - just a couple of tablespoons to start, and then bigger and bigger portions until it's all well mixed. Stir in the salt and lemon juice. Refrigerate the mixture until it's very cold, preferably overnight.


When the mixture is very cold, use a stick blender to puree the pears until they're as smooth as possible. Strain the mixture to make sure the worst fibrous bits are out. Churn the smooth icecream mixture an icecream maker and freeze it for at least 4 hours before serving.
Posted by Cindy at 4:09 pm