I had a speedy few days in Perth last week and hassled Steph for dining tips. She gave Formosa/Utopia the thumbs up, so I swung by a couple of times to suss it out. It’s tucked away in Northbridge, in a little courtyard back from the street a bit, so keep your eyes peeled to avoid walking straight past. Once you’re in, you’ve got to figure out the ordering process – the best thing to do is grab a menu, a pen and a little form for ordering and settle in at a table. The menu is humungous, with something like 200 dishes to choose from (plus seemingly millions of bubble tea and related drinks). Everything is pretty clearly labelled – I’d guess about half the dishes are vegan and spice levels are marked. It’s not cheap, but it’s not outrageous either – most mains are between $16 and $20. It’s heavy on the mock meat, although there are enough veggie and tofu based dishes if that’s not your thing.


To order, you fill out the form with the code from the menu and take it up to the counter – they double check what you’ve ordered, so there shouldn’t be any confusion even if your handwriting is as bad as mine. On my first visit I ordered the vegan version of the tom yum chicken ($16.50) with a side of the fried crispy mushrooms ($6) and rice for one ($2.50). This was way too much food, which is always the risk when you’re dining alone and trying to sample as much of the menu as possible. 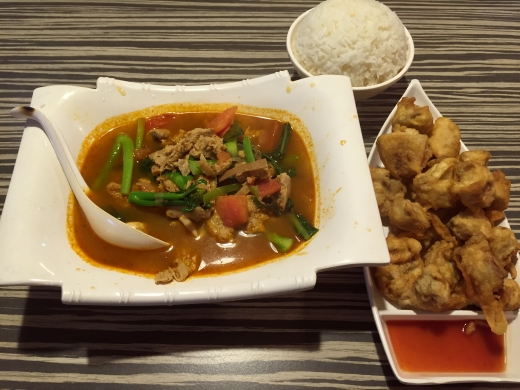 On my first few mouthfuls I was mad for the mushrooms – crispy, salty and with a nice spicy dipping sauce – but I gradually tired of them as I went on. You should probably hold off on these unless you’re sharing, the mushroomy texture got a bit overwhelming as the batter cooled down and lost its crisp. Still – five stars for the first 10 or so. The tom yum chicken was a complete success, a nice mix of hot and sour flavours in the soup and a decent amount of veggies to go along with the mock chicken.


On my return trip I took Steph’s advice and ordered the fried kuay teow ($11.50) and was once again unable to resist some accompaniment, going with the salted fried chicken ($9). For some reason the chicken isn’t marked vegan, which confused me a bit – maybe there’s egg in the batter? 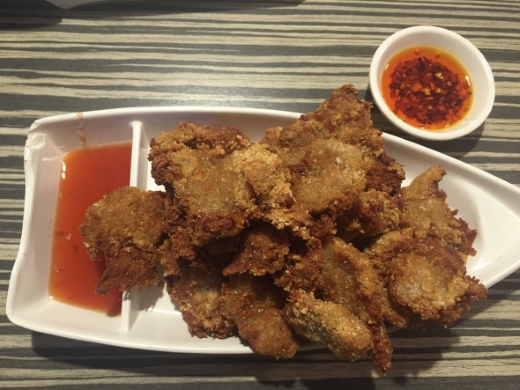 Either way, it’s delicious – crispy and salty and impressively chicken-y. The texture works better than the mushrooms over a whole plate too. The noodles were solid as well – a rich, smoky wok hei, dotted with sprouts, greens, tofu and a few chunks of mysterious mock meat. 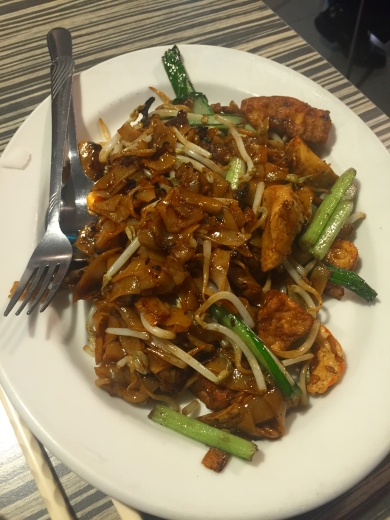 You wouldn’t really go to Utopia for the ambience – it’s brightly lit, simply furnished and there’s nothing fancy about the service. Still – there’s a lot going for it: the staff are friendly, the menu ridiculously long and the food that I sampled a pretty decent version of mock-meat heavy vego Chinese food. They’re open late, they do a good line in bubble tea and they’ve got a karaoke room out the back somewhere – you can see why Utopia is a Perth vego favourite.


There are positive reviews of Utopia on vegan about town, foodieatwork and watermelon3.

Accessibility: The restaurant access is up a flight of stairs (although there may be a lift somewhere - I forgot to check). You order and pay at a low counter. The toilets are gendered and accessible.
Posted by Michael at 8:49 pm