We spent the biggest chunk of our trip in Saigon (Ho Chi Minh City), split by the few cooler days we had in Đà Lạt. We stayed right in the heart of the backpacker district Pham Ngũ Lão at the wonderful (and affordable) Duc Vuong Hotel. This had a few upsides beyond the decent, air-conditioned rooms and ridiculously friendly staff - in particular the spectacular rooftop bar atop the hotel and the location, right in the thick of the city's densest cluster of vego restaurants. 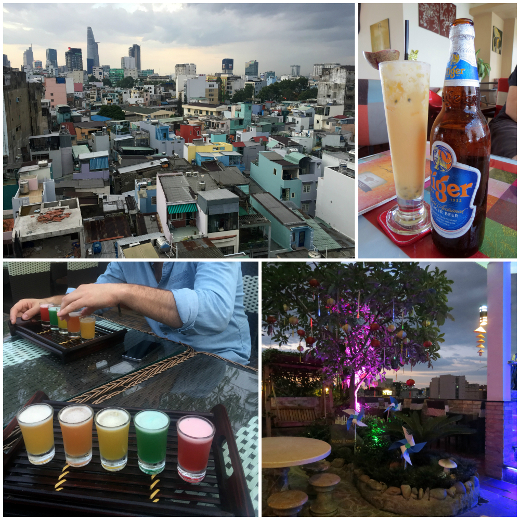 The rooftop bar offered lovely views across the rooftops of the city, cold beer, an array of excellent smoothies, ludicrous multi-coloured cocktails and some very mediocre chips. We also sampled the deep-fried tofu (a bit bland) and eyed off the  mushroom dumplings all week, but never got around to ordering them. Next time.
We sat on the rooftop on our first evening in town scanning the Happy Cow app, puzzling over the vegan restaurant located 0.05 miles from where we were sitting. Somehow, on our initial explorations we'd walked straight past Saigon Vegan, which is literally directly across the road from the hotel. 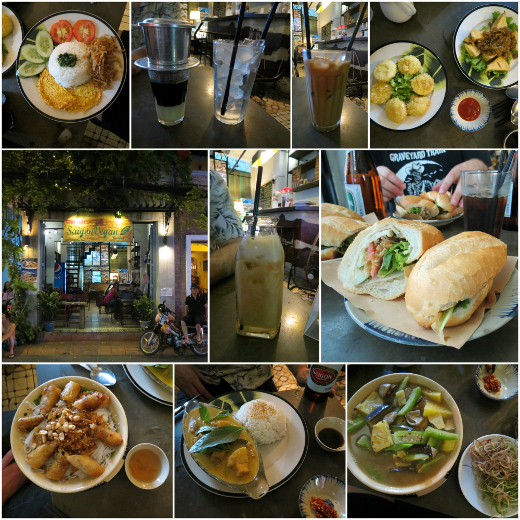 It has a pretty straightforward selection of Vietnamese dishes - noodle soups like phở, rice dishes, hot pots, tofu dishes, salads and so on (mains 45,000-60,000VND ~ AU$2.80-$3.70). Somewhat unusually, it doesn't offer much in the way of mock meat. We grabbed some excellent lunchtime bánh mis one day (pictured above, centre right), stuffed with pate, tofu and sweet, onion-based veggie floss (25,000VND ~ AU$1.50 each). At other meals the lemongrass fried tofu (pictured top right) and the vermicelli with spring rolls (bottom left) were among the highlights. The main reason we kept going back though was for the Vietnamese iced coffees (top centre), a vegan version of the classic mix of drip coffee, condensed milk and ice (35,000VND ~ AU$2.15). It's a lovely spot to sit with a snack and a coffee and watch the hordes of pedestrians, cyclists and motorbikes on the teeming Bùi Vien. 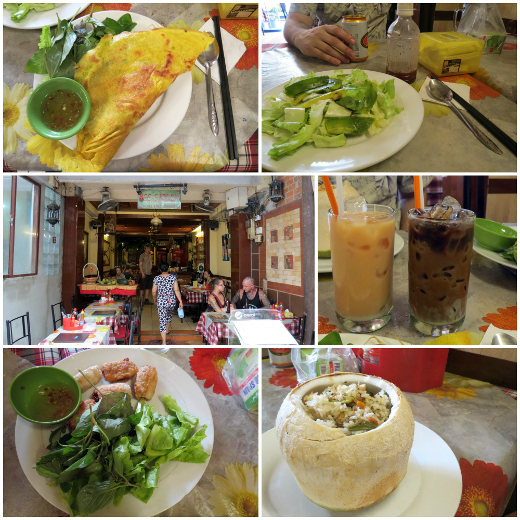 Before we discovered Saigon Vegan, we stumbled onto Bee Saigon, a hotel and restaurant on a side street off Bùi Viện that has an eight-page vego section in the menu (20,000-40,000VND ~ AU$1.25-$2.50 per dish). Our lunch here was simple and successful - avocado salad, coconut fried rice, a bánh xèo and some vego spring rolls, plus a couple of (non-vegan) iced drinks. The food was decent and cheap, but probably didn't hit the heights of some of our later meals in the city. 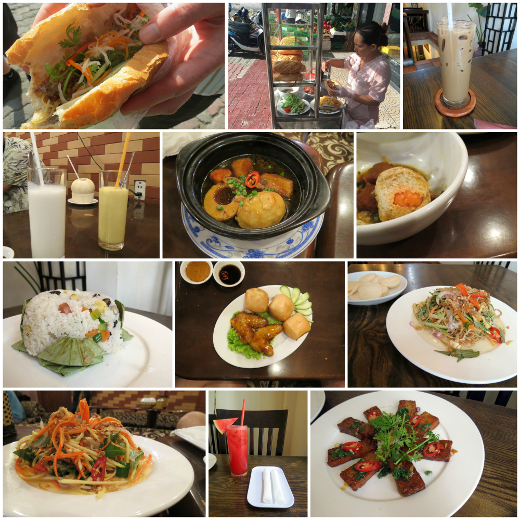 Sen Quan Chay was another local option that we visited a handful of times, often starting the day with a quick stop at their bánh mi stand out the front to grab a quick second breakfast. These were probably my favourite rolls of the trip - a good hit of chilli, a mix of pâté, mock meat, noodles and salad on a fresh crunchy roll. The roast duck version at Trang is probably still superior, but at 16,000VND (~ AU$1), this is a damn good value snack. The sit-down restaurant is more impressive, with three levels and a mix of tables and traditional Vietnamese floor seating. We made a couple of lunch-time visits, exploring as much of the mock-meat heavy menu as we could (meals are between 40,000 & 65,000VND ~ AU$2.50-$4).
Cindy ordered the mango salad here and it was so good that we wound up ordering salads almost everywhere else we visited. The chicken wings were memorable, as were the ludicrously real-seeming grilled pork. The tofu-based mock egg in the braised pork hot-pot was intriguing as well. We broke the mock meat up with some rice and tofu dishes, but the mock and the salads were the stars. 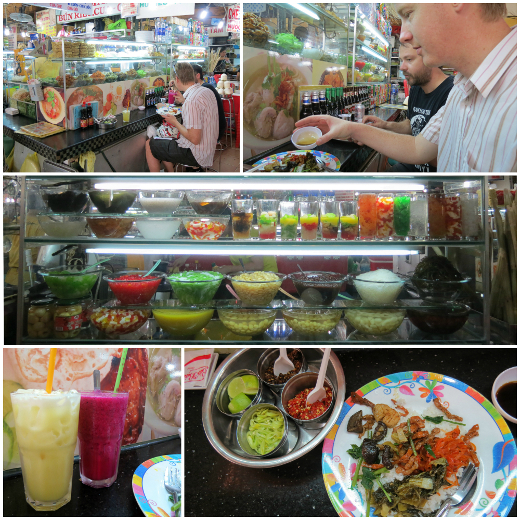 As in Đà Lạt, we fell back on the food court at the market for the occasional cơm chay - a trusty and cheap way to eat a wonderful and varied lunch. We only found one veggie place at the Ben Thanh Market, but that was enough. The drink selection at this place was great - I had a dragon fruit juice, while Cindy spurned the jellyish noodle drinks in the cabinet for her first sugar can juice of the trip. Food-wise, you pay 40,000VND (AU$2.50) and they serve up a plate of rice with a selection of mock meat, veggies, pickles and condiments - these ones didn't quite measure up to the amazing lunches we had in Đà Lạt, but they were still probably the best value meal we had in HCMC. 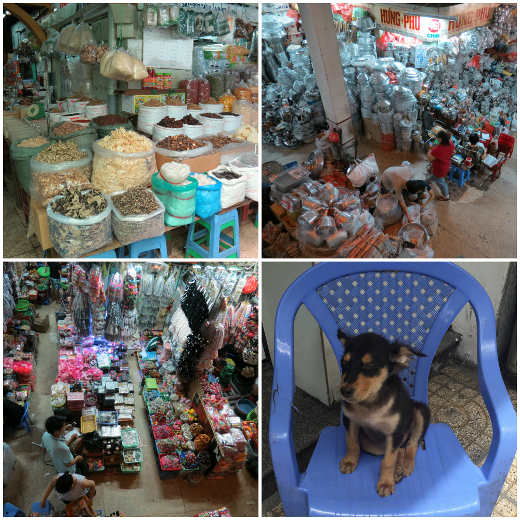 We spent a later morning wandering around the Bin Thay Market in Cholon (Saigon/HCMC's Chinatown) and found a couple of intriguing little vego stalls in its food section, but we'd over-eaten at breakfast and couldn't justify another meal. It seems like a pretty safe bet though - if you're after a quick and cheap vego meal in Vietnam, just aim for the market food courts and explore. We also stumbled across a little restaurant and banh mi stall near the nearby Ha Chuong Hoi Quan Pagoda - there are very few vego restaurants listed on Happy Cow in Cholon, but we found a handful without even really trying, so there'd be no harm in setting off without a particular food destination in mind. 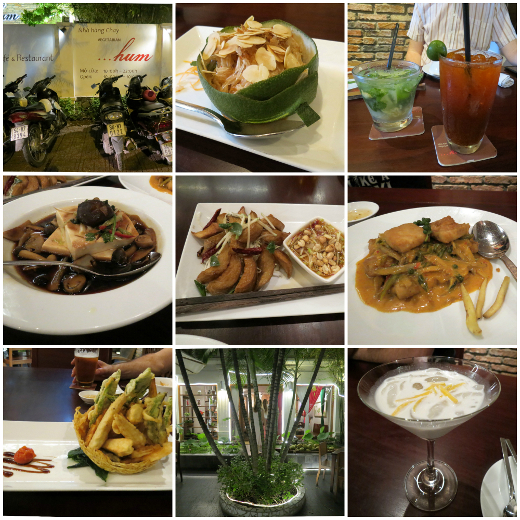 Some of our other sightseeing took us to the excellent War Remnants Museum and fascinating Reunification Palace, both of which are located conveniently close to ...hum, Trip Advisor's #3 rated restaurant in the whole city and the fanciest vego place around (which means dishes cost between 75,000 & 100,000VND ~ AU$4.60-$6.20).
The pomelo salad was a surprising highlight - bursting with spiciness, sweetness and tangy citrus flavours, while the fermented tofu was a bit blander than we were expecting. The deep-fried veggies were tempura-esque, while the tofu in spicy sauce was probably my favourite. Cindy even splashed out on dessert, sampling a toddy palm and coconut milk concoction that was jellyish and sweet. The food in general was fresh and a bit lighter than most of the other meals we had in Vietnam - it's clear that ...hum are trying for something a bit higher end than cơm chay. They generally succeed, helped a lot by the lovely setting and atmosphere - there's a peaceful courtyard and the inside areas aim a bit higher than plastic seats and tables. It's definitely worth a visit - especially when a big splurge for a meal and drinks still means you're paying less than $15 a head.
____________ 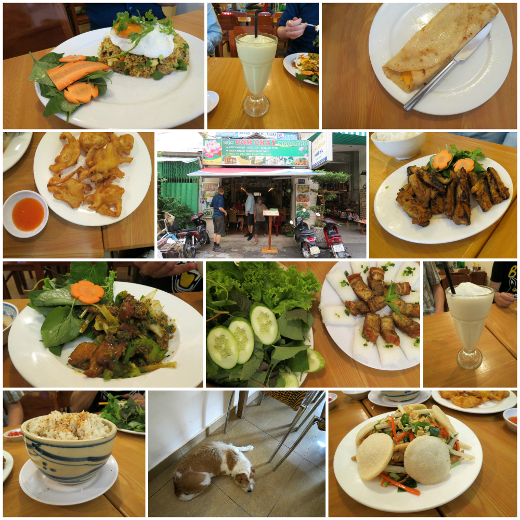 We did most of our other eating within close walking distance of the hotel, making a couple of visits to Ngoc Tho, a place that is no longer totally vego but still has a massive and separate vegetarian menu. The array of average looking pizzas and Mexican food on the menu had me worried that the standards were going to be pretty low, but the Vietnamese dishes we ordered were pretty ace. Dishes cost between 35,000VND and 60,000VND (AU$2.15-3.70). There are eggs in a number of dishes, so vegans need to tread carefully.
We had the veggie pork ribs both times we visited and were completely blown away - the mock pork in Vietnam is really next level. We were so enamoured that we tried an order of the special veg BBQ pork with rice noodles and veggies as well - the pork was typically great, but we were a bit confused about the construction process. The garlic fried rice was probably the best rice dish of the trip, and the mock chicken with lemongrass and chilli was a standout as well. Cindy snuck into the Western menu to sample a mango pancake for brekkie, which was pretty good, but didn't come near my fried rice with eggs (even if I thought I'd ordered Indian fried rice). 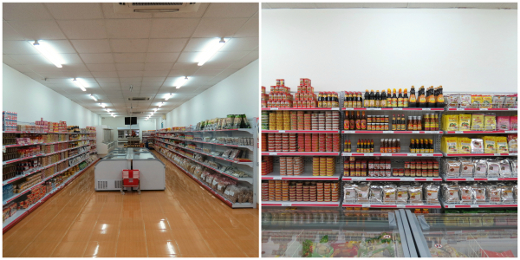 We stumbled across Pham Chay just around the corner, a supermarket reminiscent of Footscray's Vincent's. It's basically a temple to mock meat, and really not much use unless you've got access to a kitchen, but it did have us daydreaming about living in Vietnam and perfecting our BBQ pork ribs. We brought back some pate and mock deer jerky, but there was so much we were sad to leave behind. 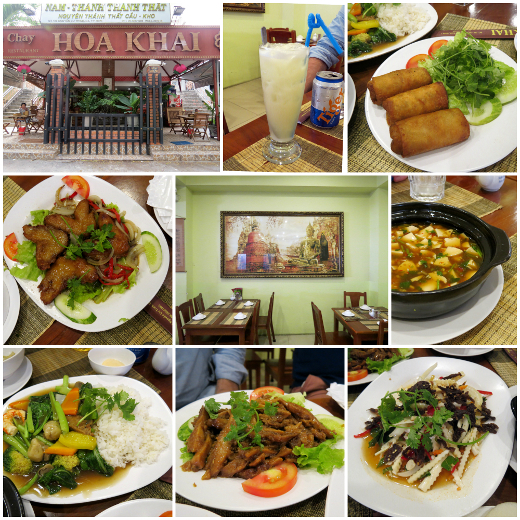 Happy Cow also pointed us towards Hoa Khai, a vegan place with more than 100 menu items to choose from and nothing more expensive than 55,000VND (AU$3.40). We were into a pretty good ordering groove by the time we came here - some fried mock meat (chicken wings this time), spring rolls, a tofu dish (Sichuan tofu), a salad (coconut sprout salad) and some more fried mock meat (chilli and lemongrass 'vegetarian meat').
This was a massive success - the coconut salad was probably my favourite salad of the week (I'm still not sure what the chewy jerky-like things were on top) and both the mock meat dishes were superb. The Sichuan tofu was lacking a bit of bite, but that's a minor quibble among a magnificent meal. Added bonus: the restaurant had some air-con and a few fans cranking the cool air around, making it a welcome respite from the oppressive heat outside. 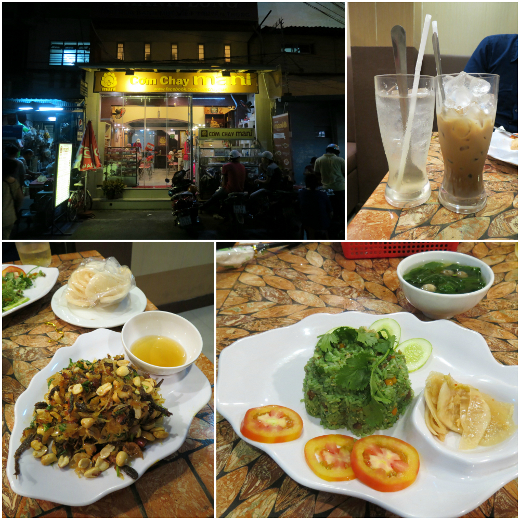 Our final local vego visit was to Com Chay Mani, a short walk across the park from our hotel. It's another air-conditioned place, working a similar style of food - salads, rice dishes, soups and mock meats, all for between 30,000VND and 55,000VND (AU$1.80-$3.40). The 35,000VND (AU$2.15) set breakfast/lunch menu (main course, stir-fried veggie dish and a soup with steamed rice) looks like incredibly good value, but we didn't make it back to try it out. Instead Cindy and I split the green tea fried rice and a Thai salad (no mock meat!), which were both excellent - the fried rice in particular knocked my socks off. It was a shame we discovered Mani so late in the trip, it definitely deserved another visit. 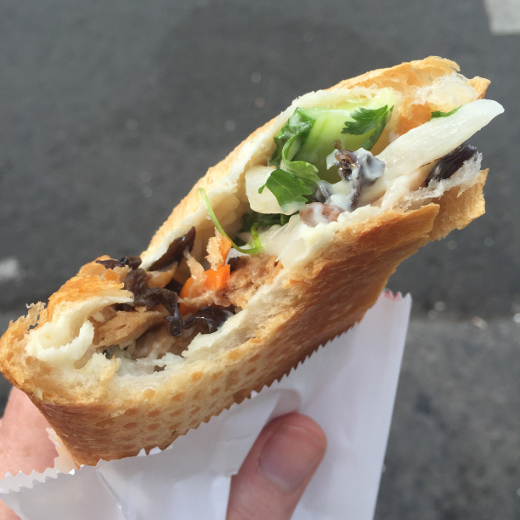 Our final morning didn't leave much time for eating - just a quick breakfast at the hotel buffet (which has a good range of fruit, but is not otherwise super veg friendly) and then a sneaky walk around the corner for a final banh mi at Anpham. There was a steady stream of motorbikes pulling up and grabbing rolls, which was reassuring - the stall sells a mix of meaty and veg dishes, but it's pretty simple to point at the 'banh mi chay' sign. The rolls here came in at 16,000VND (AU$1), among the cheapest of the trip, and had a nice mix of mock meat, mushrooms and salad. There was a condiment that was suspiciously mayo-like, so these might not be vegan-friendly - I'm not sure how to check. Still, it was a great way to finish our time in Vietnam - cheap and delicious street food ordered with pointing and sign language.
We had a brilliant time in Saigon/HCMC - along with all this food, there's loads to see and do. We were particularly knocked out by the War Remnants Museum, the Reunification Palace and the Fine Arts Museum, as well as all the beautiful buildings downtown (the post office in particular stands out). Our walk through the pagodas in Cholon was great too, although the heat got a little overwhelming. It's a wonderful city - buzzing with ludicrous traffic, stuffed with glorious food and filled with so many amazingly friendly people. We'll be back for sure.