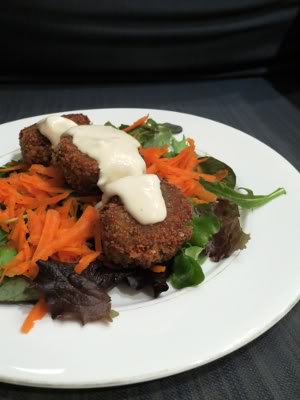 Cindy and I typically figure out our dinner plans each morning before work, based on a combination of what's in the fridge and what we feel like. Every second Thursday we're presented with a dilemma - we know we've got a veggie box coming but we've got no idea what will be in it. The website has a rough list each week but things don't always match up. This week we decided that we'd end up with at least one zucchini and went hunting for some sort of zucchini based dish to base our dinner around.

This recipe for zucchini falafel from Haalo at Cook (almost) Anything at Least Once fit the bill perfectly. It used up all our zucchini, didn't need too many other ingredients (we swapped parsley in for coriander) and the preparation was simple enough for a weeknight meal. The resulting falafel balls were pretty great as well - much softer and juicier than standard recipes. They're almost fritters rather than falafel really, although they still combined deliciously with Cindy's yoghurt/tahini/lemon juice sauce. We just chucked ours on top of some greens and grated carrot, but these would work just as well in a wrap or burger.


Whiz the onions, paprika, cumin and baking powder in a food processor, until the onion is finely chopped and everything is combined.

Add the chickpeas and zucchini and pulse some more - you'll need to scrape the sides down a bit to make sure everything gets properly sliced up. Add in the parsley and whiz again.


Scoop all the mixture out into a mixing bowl and stir through the egg. Add in about 3/4 cup of breadcrumbs, until the mix has dried out enough to be manageable.


Heat a decent layer of oil in a frying pan - you want to get it pretty hot.


Pop the rest of the breadcrumbs in a small bowl. Roll the falafel mixture into golf-ball sized spheres, roll them through the breadcrumbs to coat and drop them into the hot oil. Fry for four or five minutes on each side, soak off some of the oil on a paper towel and serve.


This makes about 20 balls, which comfortably left us with lunch-sized leftovers for the next day.
Posted by Michael at 12:52 pm