Once back at home it's always wonderful first, to settle in at home (with the cat!) and second, to see the people and places we love. In the latter case we began by booking dinner at Monk Bodhi Dharma with the Moody Noodles. MBD's developed a reputation for excellent coffee, tea, and brunch and for almost a year now they've also been offering dinner on Friday nights. The menu varies from week to week but you can expect it to be almost entirely vegan and gluten-free, with many raw options. 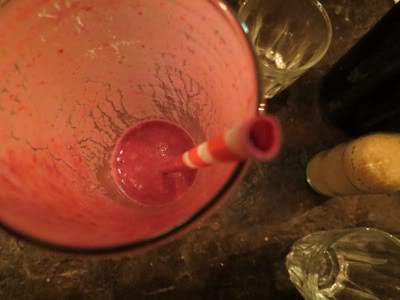 Michael arrived early and passed the time with a blackberry smoothie based on cashew milk ($9.50). 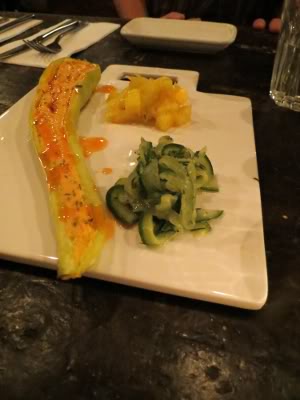 Once I'd settled in we shared the Sweet Chile Love ($12), a crunchy chile filled with a macadamia and sundried tomato cream and topped with chile oil, augmented with fresh mango and a lovely pickley cucumber salad. 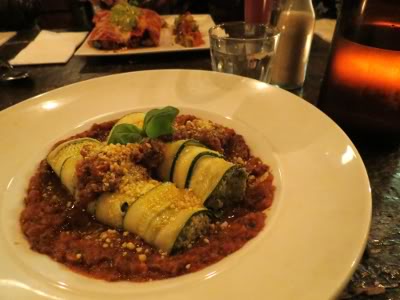 I was a little wary of a mid-winter raw main, but the cannelloni ($22) was surprisingly hearty. The zucchini 'pasta' didn't do much for me, but the minced-nut tomato sauce and broccoli-'cheddar' filling were impressive. 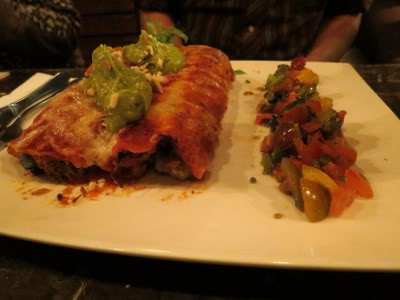 The Mexican enchilada plate ($24) was more conventional though no less tasty. The corn tortillas were stuffed with all manner of vegetables and topped with thick dollops of guacamole; I ate more than my share of the accompanying salsa. 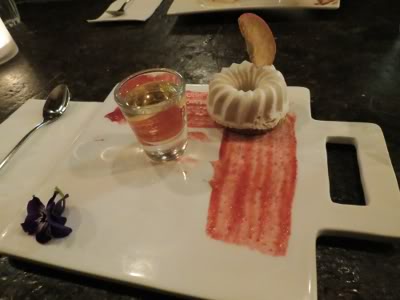 Monk Bodhi Dharma had a spectacular finale in store for us - while the savoury dishes were good, the desserts were the stuff of fine dining. The raw white chocolate cheesecake ($14.50) was delicately flavoured, set off nicely by a smear of tangy raspberry and crest of dehydrated apple. It was at its best with only a little of the caramel sauce. 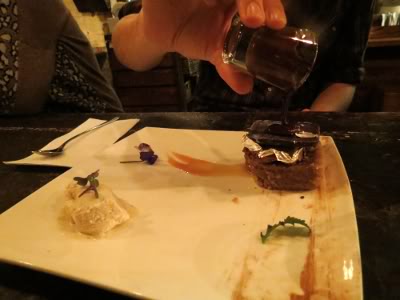 Monk's raw 'Snickers' ($16.50) is much bolder, and perhaps best suited for sharing between two. The fudgy peanut nougat base, salted caramel and raw chocolate are taken right over the top with metallic decorations and a shot glass of more chocolate to pour over. It's an incredible imitation but quickly becomes heavy and rich, and the nut-based raw vanilla cream offers no respite.


Monk Bodhi Dharma's Friday night menu is somewhat expensive and very rich, and it feels a little unfortunate to be eating such special food in such cramped conditions. What they're whipping up with is exciting and quite unique in Melbourne; I'll look forward to trying another permutation in a few months.

MBD's Friday night dinner has also been enjoyed and blogged on JMAC .:.STEPBACK.:..


Otherwise, we've blogged about MBD's brunch menu here and here. Since then it's had positive reviews on good cafe coffee, This Food Guy, In The Dough, Chizelle's Self-Delight Shake-down, soya & chocolat (in French), Short Mac Mark, Andrew Breese, Dave Plus Food, The Chronicles of Ms I-Hua, Ruth eats the FODMAP diet, mochii eats, cotolier, Little things, Black Garlic, Bitch, I Like It Hot!, Short Black, tth.am, Cherry the Chef, available all day, MEL: HOT OR NOT, Red Robyn Guide to All Things Awesome, shade of a whim, La Melbournienne, Gretel was getting fatter, the spy machine, The Tea Diaries and from the passenger. Folks are less impressed on nevertoosweet, eggswithsides and Let's Get Fat Together.

Accessibility: MBD has a narrow entry with a small step and very cramped interior; most seats are small heavy backless stools.We ordered at the table and paid at a medium-low counter.
Posted by Cindy at 8:27 am