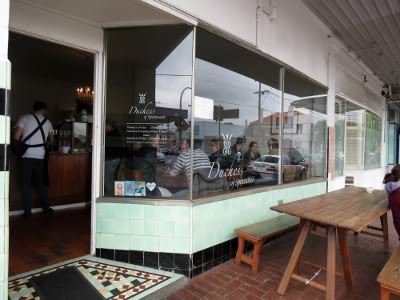 Cindy had been eyeing off the Wallace and Gromit exhibition at Scienceworks since before we went away. Promising a combination of two things we loved (claymation and science), we were sure it would be fantastic. And even more excitingly, it would give us a reason to trek over to Spotswood, home of one of Melbourne's most hype-tastic cafes, The Duchess of Spotswood.
Bad news first: The W & G exhibition is pretty crappy. It's (very strangely) sponsored by Intellectual Property Australia, and is loaded up with references to branding, trademarks and copyright. It has a couple of huge posters about music piracy, a 'game' where kids can match up junk food logos with their brands and not nearly enough actual Wallace and Gromit. Seriously, who thought that a poster with Gromit on it along with the words, "Register your trademark to protect your brand's value and reputation," was a good idea? How many kids are being won over by that message? All very weird. Anyway, the rest of Scienceworks was better, although clearly pitched at 9 year olds. I somehow resisted the urge to take over the netball bit in the sports section, but we still had fun playing with lasers and other sciency bits and pieces. Still, it's probably best for peeps with kids.
Now to the good news: The Duchess of Spotswood is pretty damn great. Tucked away about 200m from the train station, it's a much smaller cafe than I imagined (for some reason I had something the size of The Auction Rooms in my head) and queues build up quickly. Given the miserable weather, the outdoor tables were out of action and lining up was pretty unpleasant, so we were incredibly happy that a table opened up for us after just a couple of minutes - turn up in a bigger group and you'll be standing out in the rain for a lot longer. It's a pleasant and minimalist fit-out, although the current artwork (photos of 1970s rock stars) didn't really fit the vibe of the place. 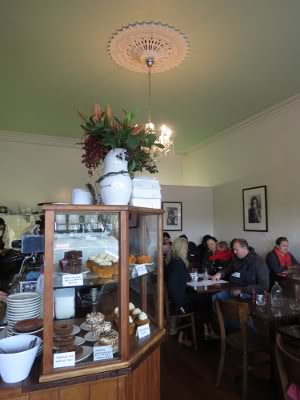 Based on my blog reading, the menu varies pretty regularly. They're shooting for a British twist on the breakfast menu, which basically means loads of meat. Still, amongst all the jowls, tongues and sausages, there are two savoury vego options and one sweet. You can also build your own brekkie with eggs and sides or choose from the cakes and other treats tucked behind the front counter. Vegans will really struggle. 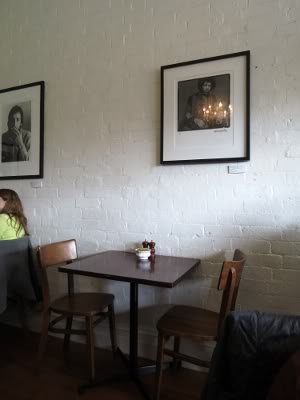 The main sweet option on the menu looked pretty dull (poached fruit with yoghurt and grains), so Cindy and I hit up the two savoury dishes. She couldn't resist the siren call of potato, opting for the 'Breakfast of Champignons' (potato and barley hash with field mushrooms, English Stilton and poached eggs, $18.50). 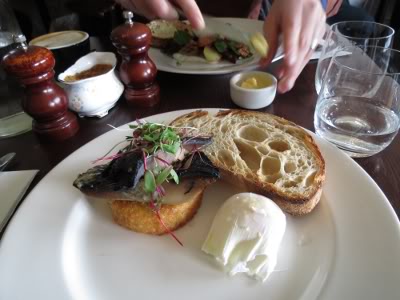 Not being a big fan of eggs, she cut the standard two eggs down to one (which I ended up eating anyway). Otherwise she was pretty happy - the mushrooms were well cooked, the hash brown had a crispily fried exterior and the small cheesy bits added a bit of variation to the dish. I reckon we should have just asked to sub the eggs right out and replace them with more mushrooms. And maybe a second hash brown.
I went for the other savoury vego dish, the Simple Pleasures (thinly sliced Zeally Bay toast with roast beetroots, candied walnuts, goat curd and poached eggs, $18.50). 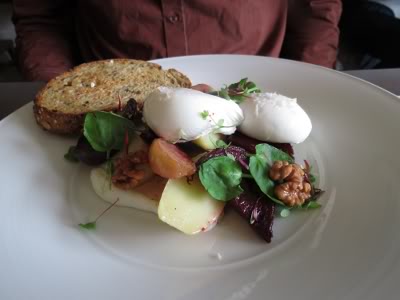 This had a nice variety of goodies - two perfectly poached eggs, beautiful candied nuts, a scattering of greens, tender and sweet roasted beetroots, a few slivers of roasted potato and a generous gob of wonderfully tasty goat's curd. It all worked pretty well together, with the cheese adding some saltiness to the sweetness of the beets and candied nuts. I'd have liked two bits of toast to go with my two eggs (three once I had Cindy's!), but that's a minor quibble.
We cleared out pretty quickly once we'd eaten (feeling bad for the people out in the cold), stopping only to grab a brownie from the dessert cabinet. It's clear that you're dealing with some pretty slick operators at Duchess of Spotswood - the food comes out quickly and brilliantly cooked, you're never stuck looking for waitstaff (who were all friendly and efficient), and (of course) the coffee is top notch. It's also great to see a place taking some chances with their menu and offering up dishes that differ from the bulk of Melbourne's brekkie places. Sadly for us, most of these dishes involve odd bits of meat, but you can see why they've built such a following. Still, I'm not sure there's enough there for non-meat-eaters to have us jumping on a train again in the near future.
____________
The internet is awash with rave reviews of the Duchess of Spotswood - check out blog write-ups from: ramblingrelish, The Chronicles of Ms I-Hua, dining nirvana, dear melbourne, Off the spork, I'm so hungree, Derek McClure, Food Rehab, Footscray Food Blog, Judging Your Breakfast, Sarah Cooks, Lots of Craving, Gypsy Ju (twice), Sharking for chips and drinks, Mel: Hot or Not, Addictive and consuming, Miss Adriennely, Wayfaring Chocolate, the silent observer, little eats, 8ites, I Eat Therefore I Am, my seasonal table, Almost Always Ravenous, Totally Addicted to Taste, Hedonistic Habits, Fig Jam and Lime Cordial, The Gourmet Challenge, My Aching Head, Gastrogasmic, melbourne gastronome (twice), Brunch Addict, ...it pleases us, Eat. Play. Shop., A Spotted Blog, Snap Story, little lady, Charles Whyte, EAT AND BE MERRY FOR TOMORROW WE DIE(T), Words and Flavours, One Mouthful, Breakfast in the S.K.Y., Backseat Baristas, hookturns, The misadventures of MissC, Caffeine City, YOU SHOULD HAVE A BLOG, Food of Hong Kong and Macau, WHO TOLD YOU THAT?, Adventures of Java Jane, Popcorn & Toast, OISHIINBO, Let's Get Fat Together, mochii eats, Fork, Knife and Chopsticks, Gastronomical ramblings, Lots of Cravings, eggswithsides, The World Loves Melbourne, two front teeth, foodwithfrank and Nathan Maurice Mallon.
Only R.F.K., Fill Up on Bread and SUNTOWNSUNBIRD have been a bit let down.


Accessibility: Duchess of Spotswood has a flat entryway into a middlingly spacious interior. Ordering happens at the table and we paid at a relatively high counter. We didn't visit the bathrooms.
Posted by Michael at 7:55 am