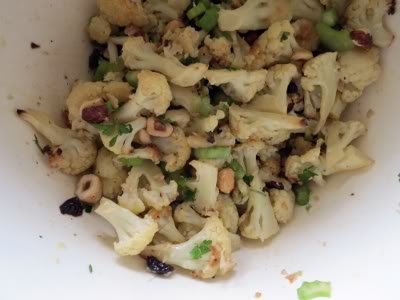 This comes from Yotam Ottolenghi's Guardian column rather than my much-thumbed copy of Plenty. It's basically a bowl of roasted cauliflower dressed up with parsley, some crunchy celery and hazelnuts, a splash of vinegar, and - in the original version - pomegranate seeds. Australia's pomegranate season is brief and not now, so instead I used dried cherries. They added the right little burst of chewy sourness, if not quite the same cheery colour.


Though the ingredients list isn't short, this is at the more manageable end of Ottolenghi's style - pretty much everything can be prepared in the time it takes to cook the cauliflower. (I might even consider tackling this on a weeknight!) Though the florets should be tender, I'd urge you to err on the side of under-baking the cauliflower. A crunchy salad's always preferable to a mushy one, right?


Preheat the oven to 200°C. Chop the cauliflower into florets. Place them all in a large baking dish, drizzle over 2 tablespoons of the oil and sprinkle over salt and pepper. Bake the cauliflower until tender and turning golden brown at the edges, about 20 minutes. Set the cauliflower aside to cool.