January, 2016: We noticed from the tram the other day that Snag Stand appears to have closed, replaced by a Mr Burger outlet. 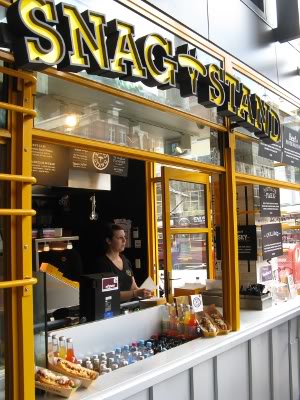 Melbourne Central's Swanston St side has been under much inconvenient construction in the past few months. Tram stops have been shifted, shops shut, pathways narrowed, and access for cyclists pretty much denied. At last it's all been resolved with a new more accessible tram stop and heaps of room for pedestrians. Bike lanes are well marked, though cyclists will no doubt be dodging and/or abusing wandering shoppers for a while yet. And Snag Stand has opened up on the corner.


I like me a vege dawg, but I didn't dare hope for more than a second that this grill-in-the-wall would sell me one. Oh, how wrong I was! Among Snag Stand's 'haute dogs' (a pun I mightily approve of) is a meatless sausage of potato, smoked apple and sage, served on a brioche roll with sautéed onions, rosemary mushrooms and truffle aioli ($9.90). While the brioche and truffle are affectations more than real  contributing components, this was darn good! A hearty snag, neither rubbery nor crumbly, with a lovely savoury flavour. 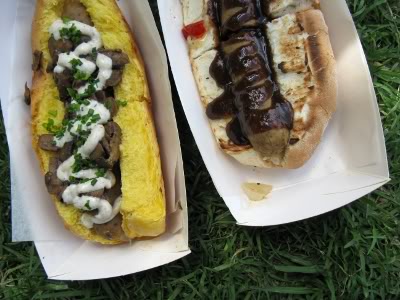 Michael took the build-your-own route, ordering his vege sausage wrapped in a 'rustic roll' and topped with sautéed onions and bbq sauce ($8.90); he would've liked more onions but was otherwise satisfied. We couldn't fit in chips, but they looked pretty good.


Snag Stand is happily extending dude food to the bleeding-heart veg*ns and gluten wusses of Melbourne. The sausages are vegan, gluten filler-free* and cooked on a separate grill to their fleshy counterparts; there's a coeliac option on the bread too. Lord of the Fries offers more diverse veg*n fast food round the corner, but Snag Stand will probably tempt us away on occasion.

*After further enquiry from Mandee, it turns out that the veg sausages aren't actually gluten-free. The gluten-free buns are vegan, but there's a lack of gluten-free stuff to put in them. The operations manager mentioned plans for new vegetarian sausages, so fingers crossed they're coeliac-friendly!
____________


new international students weren't wowed by the Snag Stand freebies they scored when it first opened. The bloggers at We Dare Food and Muddy Thrills are much bigger fans.
____________


Accessibility: Snag Stand opens directly onto the Swanston St footpath, which is reasonably flat and without too many obstructions. Ordering and pick-up occurs at a low-ish counter. The few tables available are high set.
Posted by Cindy at 9:12 am