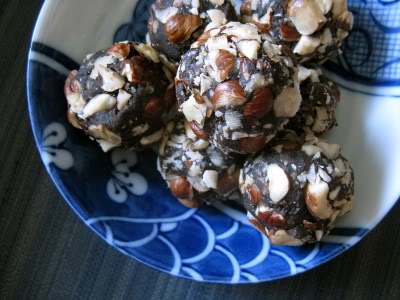 The end of 2011 brings with it the end of one where's the beef? tradition. This here is our final calendar recipe! Michael's mum gave us some beautiful Japanese-style crockery for Christmas in lieu of material for a "Robyn's Recipe Calendar 2012" tag.
I'll confess to some trepidation ahead of making this recipe. I haven't eaten carob in about 15 years - back then carob buds were 40 cents a packet at the school tuckshop and thus one of the more popular sweets. Now with more disposable income and a weakness for dark chocolate, I've not sought out carob in a long time. It seems fewer and fewer other people are seeking it out either: the sales assistant at Brunswick's Organic Wholefoods drew a blank and theorised that with dark chocolate now sold as an antioxidant-rich health food, there mightn't be much market for carob. Michael had more luck in Smith St's sister store.
That's if you ever want to consider sugar-free soya carob lucky. It's a pretty joyless product, earthy and floury and nearly 30% palm oil. I was not feeling any more optimistic after my test nibble at the corner. But determined to see this tradition through to the bitter, chocolate-free end, I persevered with the recipe. The carob melted to a silky puddle and combined smoothly with the other more truffle-like ingredients. I added an extra dash of maple syrup to ensure a bit of sweetness, rolled them out, popped them in the fridge and... they were alright. Not chocolate, of course, but pretty good. As if my carob anxieties weren't enough, I'd been sceptical about mixing sultanas and peppermint but that totally worked. You could even increase the quantities of each, I reckon!

I ate several of these at my desk the following afternoon and they sustained me through a few hectic hours. I really, actively enjoyed them; I did not expect that. I'm still not sure that I want to buy sugar-free carob again, though. Are there any carob fanciers out there? Do you have any serving suggestions for us uncreative chocolate lovers?

Grind one-third of the hazelnuts to a coarse meal, and roughly chop the remainder. In a bowl, stir together the ground hazelnuts, cream/milk, sultanas and maple syrup. Gently melt the carob and add that to the sultana mixture. Add peppermint essence to taste, and mix well. Refrigerate the mixture for 30 minutes.

Roll the mixture into balls with your hands, and press in the chopped hazelnuts to coat the balls. Refrigerate the balls further before eating.
Posted by Cindy at 10:26 pm