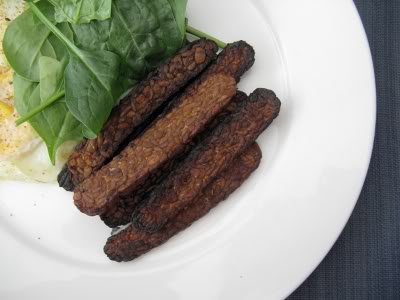 We're no strangers to tempeh-based mock-bacon, with Cindy's version a fixture in our favourite recipe list. As tasty it is, it's not really anything like bacon. In particular there's a complete lack of the crispiness that wowed us at Las Vegan, so when I saw Carla's version I was keen to try a different approach.

This recipe offered up two innovations: steaming the tempeh first to improve its marinade soaking-up ability and grilling rather than frying the tempeh strips. I'd give two thumbs up to the first, but a frustrated thumbs down to the second. Steaming the tempeh makes it much more absorbent than just using it straight out of the packet, meaning the flavours permeate right through the thin slices. I think we'll be doing this whenever we marinate tempeh in future.

Grilling the tempeh proved tricky. Carla's recommendation of 10 minutes on each side twice under a high grill didn't work for us - after the first ten minutes I'd basically turned one side of the tempeh black. I tried again using a low grill heat and turning the strips every 5 minutes or so - after two runs through we had some reasonably crispy and tasty tempehcon strips. Getting them crispy basically means drying them right out, so serving them with something that has a bit of moisture to it would be wise.

I think I'll try frying next time to see if I can get something I'm a bit happier with - I'm definitely going to fiddle around with this recipe until I hit the jackpot.


Steam the tempeh slices for about 10 minutes, until they soften and turn white.

Combine the marinade ingredients. Cover the tempeh with the marinade and leave for as long as you can afford (we did it overnight, but less time would probably work okay).

Grill the tempeh pieces under a low grill, turning regularly until they crisp up and get nice and brown - watch them carefully, they go from delicious to tasting like charcoal very quickly.
Posted by Michael at 12:25 pm