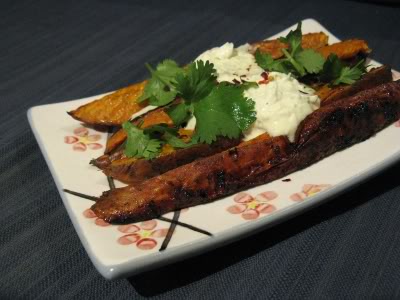 Cindy and I sat down on Thursday morning to brainstorm dinner ideas. Despite dinner for the day being entirely my responsibility (I was working from home so could sneak off to the markets after breakfast and do any prep that was needed throughout the afternoon), we somehow ended up eating wedges as our main meal. I'm still not quite sure how Cindy convinced me, although I suspect her use of the magic word (Ottolenghi) had something to do with it. We made a pretence at being healthy by having this salad on the side, but it was really all about the wedges.

At least these were interesting wedges - the sweet potatoes were nicely offset by the creamy and very citrussy creme fraiche sauce. I'd have liked to get a bit of crunch into the wedges somehow, but our sweet potatoes seemed like they were just going to keep browning until they burned without ever really changing texture. Still, this was a success - I'd definitely make them again, although probably as a side or a snack rather than for dinner.

Cut the sweet potatoes in eighths longways - you want long and skinny wedges.

Lay them out in a prepared baking tray and brush with olive oil. Sprinkle with the ground coriander and salt and then bake for 25 minutes or so. You want them to start browning up and, ideally, going a bit crispy on the outside.

In the meantime, make your sauce - just combine the creme fraiche, lemongrass, ginger, limes and salt in a bowl.

When the wedges are cooked, serve them with the sauce and a sprinkling of coriander leaves and chilli flakes on top.
Posted by Michael at 12:36 pm