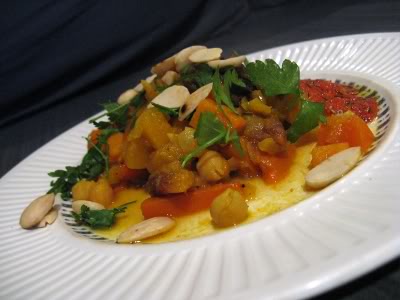 This month it was my turn to tackle the calendar recipe - a task I was happy to take on given that it required only 1 tiny tweak to turn into a vegan and gluten-free delight. It's a pretty impressive meal, with a nice combo of winter root vegetables and warming spices. I probably went overboard with the stock, which meant that we ended up with something more soup than stew. Maybe if we'd used a tagine as specified rather than just a big pot things would have worked out better. Still, with a pile of quinoa on the side and some of this harissa drizzled on top, this was one of the most hearty and warming meals of the season.
Winter vegetable tagine


Heat the oil in a big saucepan and cook the onion until it softens up nicely.
Add the vegetables, the tomato paste and all the spices.
Cover the veggies with stock (don't be heavy-handed here!) and bring it to a simmer. Pop a lid on it and cook gently for 45 minutes.
Add the chickpeas, apricots, dates and honey and simmer for another 20 minutes.
Scatter with herbs and almonds and season to taste when everything is tender and delicious.
Posted by Michael at 5:08 pm