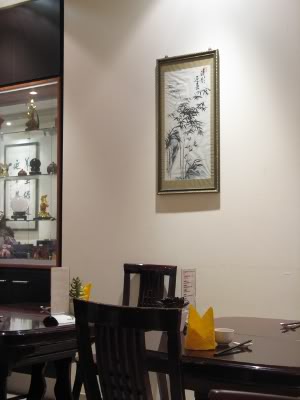 On Saturday night we met up with some friends to feast on the Chinese-style mock meats at Enlightened Cuisine. The set banquets are always tempting, but we resolved to create our own Mighty Banquet of Probably Way Too Much Mock Meat. 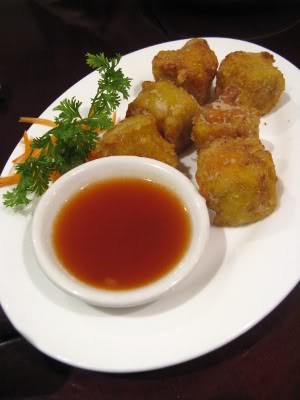 The first plate to arrive held fried dim sims ($4.50) and they were gobbled up quickly, stuffed with a white mock meat that didn't taste of much. 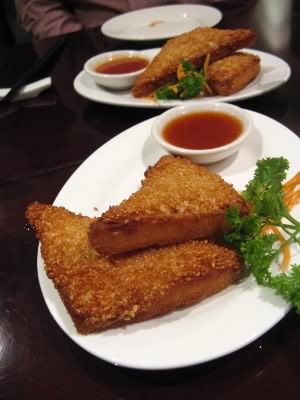 Next came the highly anticipated sesame prawn ($4.50). This toast is deep deep-fried crispy and golden brown, all the way through to the mysterious white 'prawn' filling. 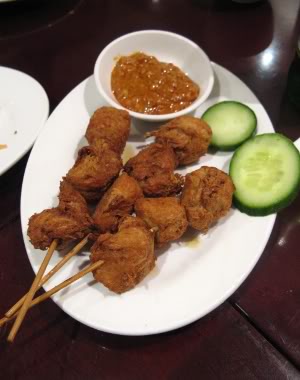 There were also chicken satay skewers ($5.50), which I thought were a bit undercooked in the middle. (Still it could be worse - they weren't undercooked actual chicken.) 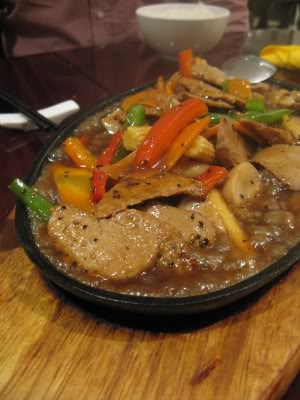 The first main to arrive was some impressively sizzling pepper steak with mushroom ($17.90). The steak slices were homogeneous but tender and the sauce was certainly heavy on the pepper. It wasn't too strong, though, providing lots of seasoning without sticking in my throat. 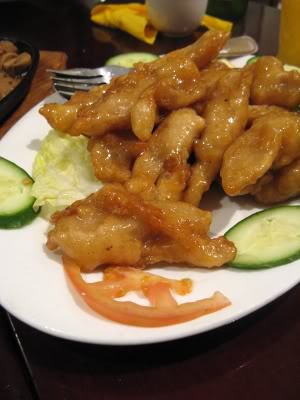 I used up my ordering option on that ol' Aussie fave, lemon chicken ($16.90). I was delighted that the sauce wasn't sickenly sweet and had a proper lemon sourness to it. Alas, the battered chicken was soft and doughy again. Maybe I need to let this custom go. 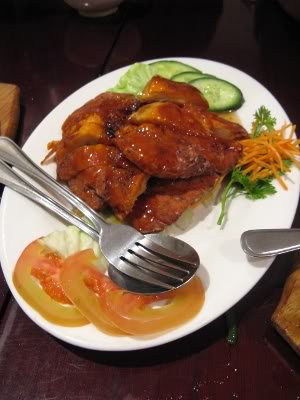 By contrast the plum sauce duck ($16.90) had an unremarkable gravy and superlative meat texture, crisp on the outside, just a little nobbly, and 'flesh' with a bit of chew but no rubberiness. 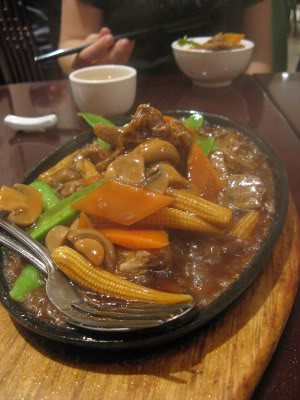 The sizzling lamb ($17.90) was another winner and arrived with a good dose of proper vegetables. 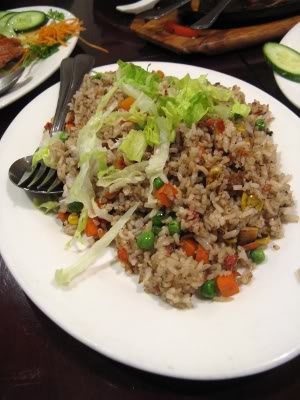 Once the steamed rice ($2.20 pp) supplies waned, some wag ordered a platter of special fried rice ($13). I could barely touch it, though I admired the charred corn kernels. 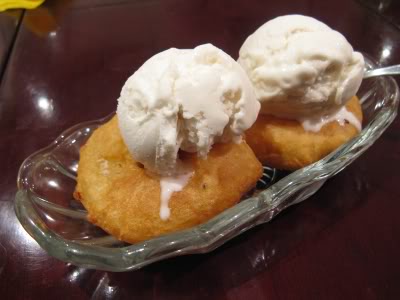 I did find room and sufficient encouragement for dessert. I shouldn't have bothered, though - the pineapple fritters were bloated and heavy with far too much batter. I ended up much the same, even though I didn't finish the bowlful. And would you believe that two of our number ordered more prawn toast for dessert? And they suffered less regret than I. Amazing.


We ordered with abandon and our bill (for four people, including drinks) came to $171. That's not cheap, but we ate well... perhaps not nutritionally well, but certainly in great quantity and with much enthusiasm! Enlightened Cuisine has been highly consistent in the four years we've been visiting - the great dishes have always been great and the few less wonderful ones disappoint for precisely the same reason each time. The wait staff are distant but never rude.


Enlightened Cuisine will not suit all moods and tastes but it's a delight when the right people, appetites and dishes collide. Especially when somebody orders prawn toast.
____________


You can read about some of our previous visits to Enlightened Cuisine: one, two and three.


This restaurant has received many reviews, almost unanimously positive, since then from Vegan About Town (three times!), easy as vegan pie, More Cheese Please, tofu in disguise, MEL: HOT OR NOT, vvoc.org, apmmryyu, Vegetarian Life Australia and MelbourneStaycation.com.
____________

Accessibility: The entry is flat and wide; there's a reasonable amount of space between tables. There's table service and bills are paid at a high counter. From memory, access to the toilets is narrow and includes a step.
Posted by Cindy at 6:32 pm