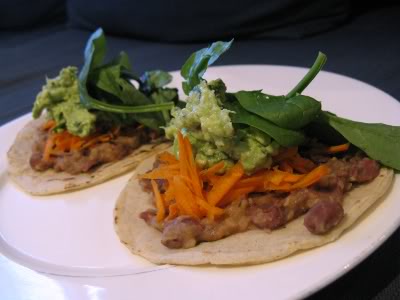 When Michael made his arepas with the wrong kind of masa harina, Anna pointed out that he'd bought the right kind of masa harina for tortillas!  So we flipped to the homemade soft corn tortillas recipe in Viva Vegan and had a go.  Making the dough couldn't be easier - stir together masa harina, salt and water - but rolling and frying the tortillas caused some initial frustration.  Sandwiching a dough blob between two sheets of baking paper, it wasn't too difficult to roll a reasonably circular tortilla.  The challenge was prising it off the paper and landing it, unwrinkled, in the hot frypan.  I botched and cursed over quite a few dough balls, scraping them off the pan and re-rolling (and re-re-rolling) them.
Eventually I figured out that I was probably trying to roll my tortillas far too thinly and I had more success when I allowed them to be a couple of solid millimetres thick.  They didn't look too fancy but they were mighty satisfying to eat - nothing like the wheat-based ones that Old El Paso churns out, and perhaps even better than the near-authentic ones I've eaten at a few local restaurants.  But that might just be the pride talking.
After I posted a little tortilla-rolling grumble on twitter, nerdfish offered me this advice within seconds:

Lady knows her home-made tortillas!  These tips were a good fit for the hassles I'd had and were all the encouragement I needed to borrow a tortilla press and invite five friends over for a taco lunch a few days later.
Posted by Cindy at 10:23 pm