A lot's been happening at Lord of the Fries since we last wrote about them. Their empire of vego junk food has expanded to Melbourne Central, Northland and Chadstone and their menu's been extended too. We stopped by the Melbourne Central outlet on Sunday afternoon for lunch. 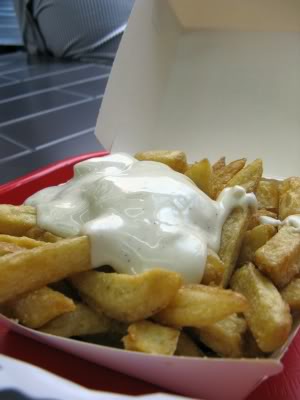 You might have noticed the most short-term of their changes in that picture up top - throughout February, you can get wasabi mayo on your chips ($3.95 chips + $1.25 sauce)! This concept pleased me no end, though unfortunately the execution was less impressive. I couldn't detect any wasabi in my mayo at all, not even the faintest tickle. Oh well. Their straight-up Belgian mayo is one of my favourite classic sauces, anyway. 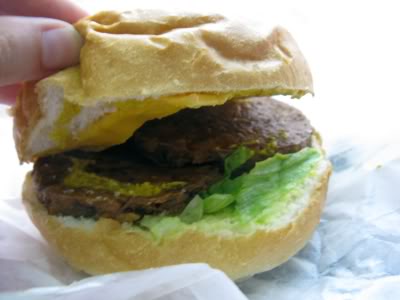 It seems the burgers now come in three sizes (with a 'mega' version now on offer for $7.95), and there's the new Lord's Chicken burger ($5.95)! The vego chicken patties nestle in a bun smeared with mayo, mustard, lettuce and cheese. Michael's ambivalent about this innovation but I'm all over it - the 'chicken' has a nifty chewy texture, a faint hint of the Colonel's secret herbs and spices and I dig those creamy condiments. My only quibble would be with that fairy floss they're calling a bun. Even when I'm scoffing junk food, a little fibre wouldn't go astray! 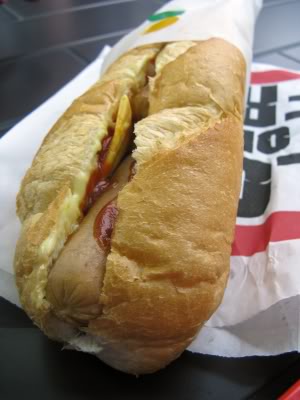 Like the 'beef' burgers, this LOTF branch does hotdogs ($5.95) in original, spicy and big mark varieties, and Michael went spicy. If you've had a vege hotdog smothered in sauce, then you know exactly what to expect and this was precisely what Michael was after. I hear they didn't flinch on the hot sauce either.
That was enough to stuff us to the gills, but there are still more novelties to be had - we saw Mexican soft drinks and vegan cookies and brownies here too, and down at the Lord's on Flinders St you can buy La Panella's sublime pies and sausage rolls (at an insane markup).

It's all a bit much for a vegetarian junk food junkie to take in! However, not everything is yet available at every store. So front up to the nearest one and take your chances. What's the worst that could happen? A fallback cup of their chicken nuggets is hardly a disappointment.
____________
Read about some of our previous LOTF visits here, here and here.
Posted by Cindy at 10:30 pm