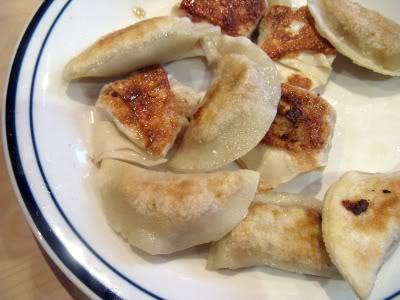 On Saturday night Steph and D gathered a large crowd of potluckers together to mark Chinese New Year (blog posts thus far from Vicki and Steph, twice!). This was the first potluck we'd had since Kristy had her Coeliac diagnosis, so the general theme was Chinesey and gluten-free. Aha, I thought - I'll make vegan, gluten-free dumplings. What could be more delicious?

My research quickly turned up the fact that pre-made dumpling wrappers are all wheaty, so I resorted to making my own dumpling skins. The recipe comes via Jill at 'Hey that tastes good' and is pretty simple: just combine a bunch of non-wheat floury things together with a bit of oil and water and you've got your dough. A bit of rolling and some circle slicing and you're ready to steam yourselves some gluten-free dumplings. 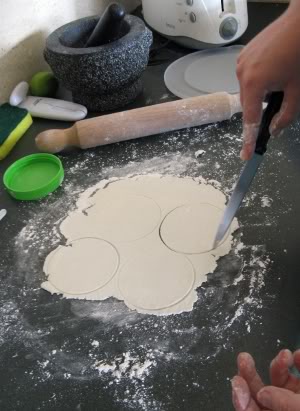 Which require some sort of filling. In my focus on the dumpling skins, I hadn't given much thought to what we'd put inside them. Cindy found this recipe, which required a bit of veganising - I almost used TVP instead of pork mince but at the last minute realised it wasn't gluten-free and went with tofu instead. And then I just poured the soy sauce in. Soy sauce, for the uninitiated, is made with wheat. Wheat is chock full of gluten. I am an idiot. By this late stage there was no time to start the filling again (we still ended up half an hour late), so my 'gluten-free' dumplings ended up being inedible to their intended audience. Very disappointing. 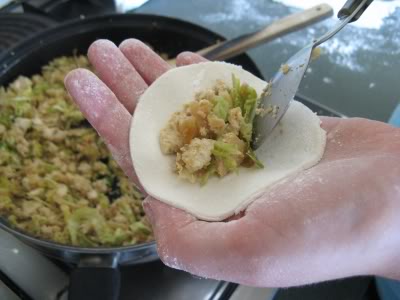 The dumplings themselves turned out okay. The skins were pretty dry and unappetising after they'd been steamed, but a quick spin in the frying pan at Steph's place improved them immensely. I was too disconsolate to really enjoy them, but Cindy reported reasonably high approval levels from the non-coeliacs at the potluck. Note that the recipe below is designed to make heaps of dumplings - it could easily be halved.

Mix together the three dry ingredients and then add the oil and water, mixing until things get doughy. Roll the mixture into a ball and cover. We refrigerated at this stage, but you can just leave it to rest for half an hour or so.

Fry the onions, garlic and ginger in the sesame oil for about five minutes, until they're nice and soft.

Add the tofu and cabbage and stir-fry for another 10 minutes or so.

Stir-through the tamari and sherry, along with the bamboo shoots, salt and pepper and cook for five more minutes.

Leave to cool for half an hour or so until you're ready to get dumpling folding.

Flour up your counter (rice flour! Don't mess it up now!) and roll out small chunks of your dough (see above). Cut out circles the width of a Goulbourn Valley peaches container lid.

Put a teaspoon or so of filling in the middle of each circle (don't overfill, it's tempting but foolish) and gently fold them closed, wetting and pinching the edges to keep things together.

Repeat until you run out of dumpling skin or patience.

Steam the dumplings in a bamboo steamer for ~ 15 minutes and then lightly fry on one side in sesame oil before serving. If you've got this far without trying to poison one of your friends: well done, you've made delicious gluten-free dumplings. Otherwise: spend half an hour having a complete sook before buying some consolation mock-meat for said friend which, it turns out, probably isn't gluten free either. Then cry.
Posted by Michael at 9:06 pm