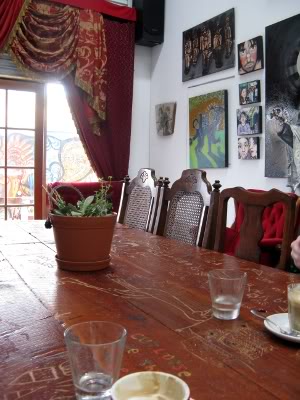 Our first visit to Court Jester was such a success that when Gem from the excellent Soupurban suggested a Brunswick brunch, there was only one place we wanted to visit. Things were a little busier than our first trip, suggesting that word is gradually spreading, but we still snared a four-person section of the big communal table without any trouble.

The menu isn't massive, so Cindy went straight back to the blintzes which had so wowed her last time. Alas, by 10:30 or so there wasn't a blintz left in the place. The waiter was quick to suggest an off-menu alternative - French toast with the blintz topping. 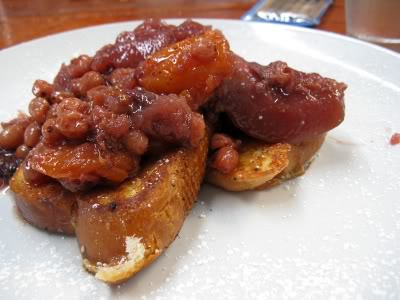 This was an excellent recovery of what had seemed like a major setback. The French toast was splendid and the topping as impressive as it had been with the blintzes. If anything this was missing the creaminess that the blintzes' ricotta stuffing provide - perhaps some mascarpone would have done the trick.

As much as I'd enjoyed the Brunswick Green, I decided variety was the spice of life and tried the other non-meaty savoury option on the menu, the creamy casper (baked free range eggs in sour cream w/ mushrooms, zucchini, spinach and shredded gruyere cheese, served with crispy Dench toast, $12). 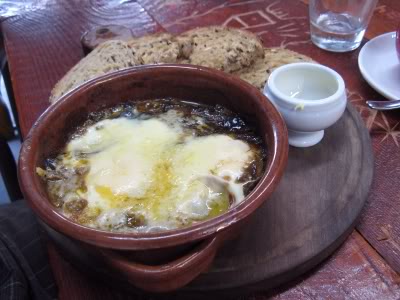 This was a hearty breakfast - lots of heavy mushrooms and rich gruyere, which would easily work as a late lunch or dinner. The flavour combinations were excellent again, although by the end of the dish I was running out of enthusiasm for the cheese.

The coffee was great again and the staff as friendly as ever. One staff member told us that they're about to appear in Epicure, so they've well and truly been discovered. Get in quick before the line is out the door!
____________

Read about our previous visit to Court Jester here.
Posted by Michael at 9:05 pm