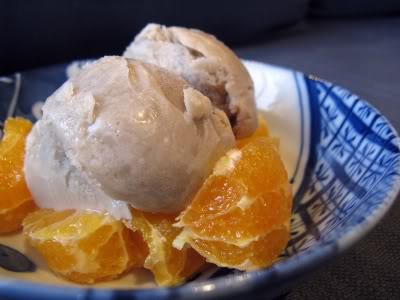 Not having made dumpling skins before, I anticipated that Michael's Chinese New Year potluck preparation would be a bit of a challenge (though I didn't imagine quite the debacle it became!). I figured that if I was going to supply something sweet it'd best be made in advance - a perfect excuse for icecream. I know icecream's not exactly traditional CNY fare but there's this funny-looking orange-Szechuan pepper recipe in David Lebovitz's Perfect Scoop that I thought would make a nice twist on the theme.
Of course, it being a David Lebovitz recipe, it was chock full of eggs and dairy and involved lots of pans. I shrank down the steps, using creamy soy cooking milk (analogous to evaporated cows' milk) and some arrowroot as a thickener. This no doubt changed the taste and texture of my icecream but not to its detriment - the orange and Szechuan peppers were certainly bold enough to mask the soy. They're so bold that a little scoop of this icecream is more than enough. The orange hits you straight up with its sweetness, acidity and a little bitterness before the pepper is unleashed in the back of your throat. It's quite the palate cleanser!

In a medium saucepan, stir together 1 can of the milk, the peppers, orange zest and sugar. Continue stirring the mixture over low-medium heat until the mixture is hot and the sugar is dissolved. Stir in the arrowroot, take the mixture off the heat and rest it at room temperature for an hour so the flavours can infuse.
Strain the mixture into a bowl - I used a fine sieve lined with muslin to squeeze through as much liquid as possible. Whisk in the second can of milk and refrigerate the mixture until very cold. Churn and freeze it using an icecream maker, according to the manufacturer's instructions.
Posted by Cindy at 8:35 pm