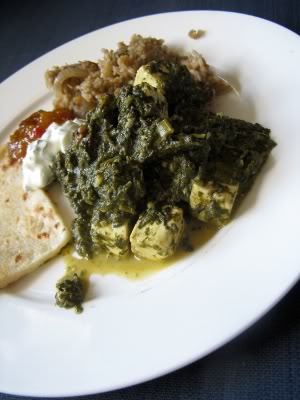 Tuesday was my mum's last day in Melbourne so we invited her, her sister Carol, and some family friends of many, many years to come over for dinner. For our main meal, I had had the same awesome silverbeet-gobbling idea as wantingkneading: a greens-based Indian curry. We've made palak paneer many times before and eaten it even more often from restaurants, but since falling for Indya Bistro's version I thought I'd branch out and try a new recipe at home. My couple of Indian cookbooks were surprisingly not much help, but it didn't take much longer to find a version that appeared on SBS's Food Safari.

We did most of the shopping and curry-making on Sunday. Doubling the recipe meant that we used up all of our large bunch of silverbeet, two bags of spinach, and Michael even returned to the IGA for two blocks of frozen spinach to make up the full kilo. Believe it or not, I was actually worried that we wouldn't have enough - those greens sure do shrink down when they're cooked. The one alteration I made to the recipe was to add some stock after the blended greens, since it looked a little dry. (Maybe I squeezed too much water out of the greens.) Michael made the finishing touches of cream and garam masala on the night and I gotta tell ya, that cream makes all the difference to the texture. Even a little smoothes the texture out immensely and just melds the flavours somehow.

Rather than making a second curry, I tried out Kitchen Hand's recipe for lentil rice as a substantive side. It wasn't much of a looker, with the red lentils disintegrating into grey mush. However, the flavour was terrific - a sweet and mild mix of cloves, cardamom, cinnamon and nutmeg, scattered with gently cooked onion strips.

It's worth noting that neither of these recipes includes any chilli at all. It's a safe choice for a large group of guests, and we made sure there was plenty of chutney and pickle on hand for the few who wanted to kick it up a notch.

Bring a large pot of water to the boil and blanch the greens in batches for 3-4 minutes per batch. Transfer the leaves to a colander, refresh them in cold water, then squeeze out the water. Puree the leaves (in batches again) in a food processor until mostly smooth.

In a large pot, heat the oil and add the cumin seeds, ginger, garlic and onions. Fry them until soft and browning. Add the tomatoes and mush everything together to make a paste. Stir in the green puree and add salt to taste. Stir through the paneer cubes. Allow everything to heat through and add a little stock or water if the mixture appears too dry. Stir through the garam masala and cream just before serving.

Sweet-spiced lentil rice
(a recipe from What I Cooked Last Night, quantity increased by half)

Wash the lentils, discarding the ones that float, and draining the rest.

In a large saucepan, melt the ghee and add the onions. Gently fry the onions until golden brown and remove half of them, setting them aside for later. Add the lentils and rice and stir them through the ghee so that they're well coated. Stir through the remaining ingredients and bring it all to the boil. Reduce the heat to low, cover the saucepan and cook for 20 minutes.

Serve garnished with the extra onions.
Posted by Cindy at 9:26 am