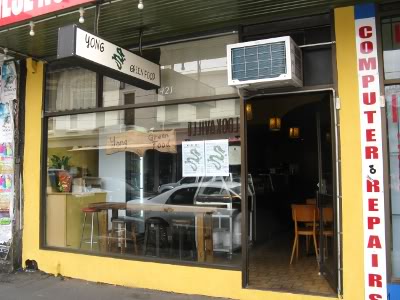 A few weeks ago Brian noted the impending opening of Yong Green Food at the northern end of Brunswick Street. Once the doors opened, the vegan mafia were quickly on the case, with Steph getting in with the first review. We took a week longer to swing by, and the menu looked to have expanded, with two massive pages of meals to choose from (almost all of them vegan). Yong specialises in raw food, but both Cindy and I were in the mood for something cooked, so we left the rawsagne for another day. 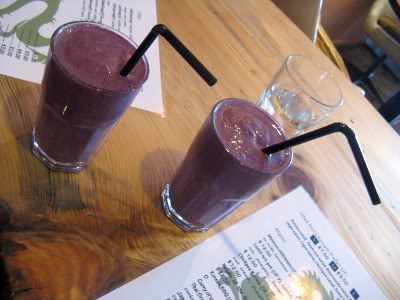 We did try the smoothies, made from almond milk, vanilla beans and blueberries ($8.50). These were cool and tasty, but if we'd paid attention to the prices before ordering we may have settled for something else.

I wanted to try the Japanese curry, but only the Thai curries were on offer for the day, so I settled for a vegie green curry ($12.50). 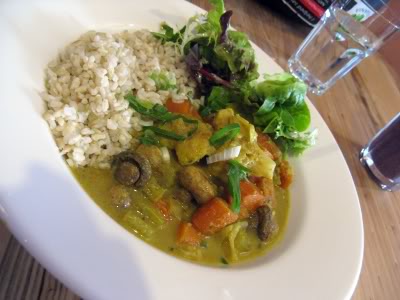 While this was a pretty unadventurous order, it hit the spot nicely - the sauce was really spicy and coconutty, and the vegies and rice were a healthy combo I needed after too many days of festive eating. The price is a little steep for a fairly straightforward curry, but I was left well satisfied by the quantity and the flavour.

Cindy was a bit more creative with her order, opting for the fishball wrap ($8.50). 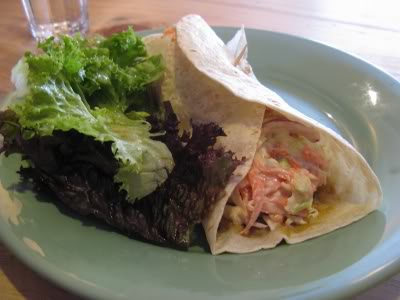 Cindy was pretty keen on the fishballs, which were probably tofu-based and were a satisfying non-rubbery texture (although not particularly 'fishy'), but found that the coleslaw which made up the rest of the filling a little heavy on the vegan mayo.

The staff were wonderfully friendly and there was a decent number of people coming through, which bodes well for Yong's future. On the other hand, the food was decent without being particularly inspiring, prices are a tad on the high side, and they're not far away from the juggernaut that is the Vegie Bar. Hopefully the raw component of the menu will draw enough devotees to keep them afloat in an area that's a bit of a restaurant graveyard. We really are spoiled for veg-restaurants in the inner-north, and it's great to have another option for a quick Fitzroy meal.