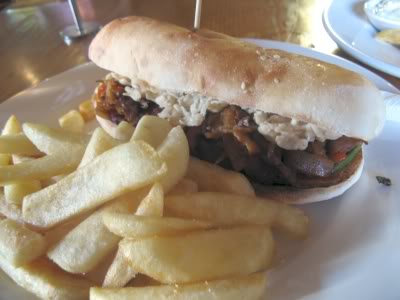 The East Brunswick Club's vegan Philly Cheese Steak has been an elusive and tantalising beast. It has been on and off and on and off the specials board, and been unavailable on $10 Mondays and Mexi Wednesdays. Now the EBC seems to have revised its menus. In the face of rising food costs, Monday meals have risen to $12, Mexi Wednesdays might be no more, and the Philly Cheese Steak has earned a more permanent place on the standard menu.


At $17, and notably absent from the cheap Monday menu, you'd want this burger to impress. It does! Silky-tender mock duck pieces get sauteed with capsicum and onions in a light and lightly spicy sauce, then stuffed into a roll with some pleasant-but-unnecessary vegan mozzarella. I'd be as, if not more, happy if the cheeze was replaced with some leafy greens but it'd be a token stab at nutrition in what's a fundamentally junky pub meal.


On this Thursday night, the EBC was typically popular and the food took a little while to arrive. However it was well worth the wait, with our meals arriving at the same time, with a smile and crispy hot (an improvement on some past performances). The chips were probably the best batch I've had here. The food's neither refined nor nutritious but if that was what we were after, we wouldn't have headed down to the pub!


Kristy and Toby have both written about the EBC's Philly Cheese Steak over at kblog.


You also can read about our previous visits to the EBC: one, two, three, four, five.
Posted by Cindy at 7:43 pm