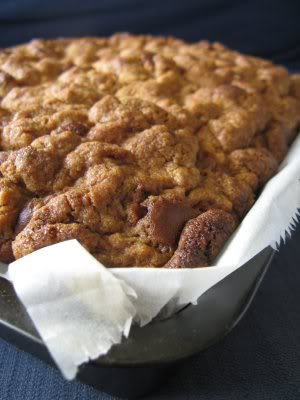 We had a student seminar scheduled for our lab just hours before everyone was due to take off for the Easter weekend. Clearly an accompanying cake would be required to lure everyone in. It had already been a week of working longish nights and spending the days sharing afternoon teas, birthday cakes, and chocolate eggs so I searched my many, many bookmarked recipes for something that didn't contain chocolate and wouldn't keep me up all night with its fiddliness. Lindyloo's recent success with a peanut butter coffee cake fit the bill. It was recent enough that I remembered how much it impressed her and I didn't bother reading her post all over again before shopping for and preparing this cake. If I had, maybe I wouldn't have done a couple of stoopid things.
First, I was all surprised when the cake batter tried to devour my electric mixer. Seriously, peeps, this is one thick cake batter. Yet it creates a surprisingly normal cake crumb. This is in spite of the other BONUS stoopid thing I did, which was to forget I was all out of baking paper until the batter was ready. This is not a great idea under any circumstances but as I understand it vegan baked goods are particularly sensitive to losing their airiness when they sit around too long. This cake batter spent some time sitting around while Michael heroically tripped down to the local IGA-no-longer. But this cake took it like a champion, with a crumb slightly lighter than banana bread, and pulled off the role of 'normal' (i.e. non-vegan) home-baked cake.
The Second Stoopid Thing I Did was to choose too small a cake tin. I can't imagine why I didn't use the pretty white baking dish that approximates the dimensions recommended in the recipe. Instead I used a much smaller square cake tin, and I was a little alarmed to discover the the peanut butter crumble almost erupting from the tin after ten minutes in the oven. But it didn't spill over, it just blackened a little around the edges and took much much longer to cook through than suggested. It didn't look like the seminar enticement I was hoping for.
Never mind. It was super-tasty: gorgeous texture, lots of peanut buttery goodness and the faintest hint of banana. Just perfect for afternoon tea. Preaheat the oven to 190°C. Grease a 9 x 13 inch baking pan. Really! Not something smaller.
For the topping, stir the brown sugar and flour together in a medium-sized bowl. Blend in the peanut butter and Nuttelex with a fork.
In a larger bowl, stir together the flour, sugar, baking powder, bicarbonate of soda and salt. Beat in the milk, banana, peanut butter and Nuttelex, until you have a smooth (but thick) batter.
Pour the batter into the baking pan, then crumble over the topping. Bake the cake for 30 minutes (or more, if your pan is too small), until it passes the ol' skewer test.
Posted by Cindy at 9:24 am