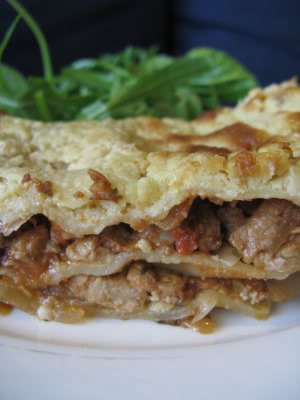 When I first suggested lasagne for dinner recently, Cindy plied me with more options than I could begin to take in. I opted for the first on the list, the eggplant lasagne rolls, but I had my eye on the tempeh lasagne that Anni and Heikki over at Tofu for Two raved about. It's a different beast to the eggplant rolls, going for a much meatier and more traditional filling. The tempeh soaks up the salty and smoky flavours from the soy sauce and liquid smoke and, by the time it's all been mushed together with onions, garlic, tomatoe sauce and basil, you've got yourself a filling that would satisfy even the meatiest meat-eater. The vegan version of the white sauce was also a success, with the nutritional yeast and lemon juice giving a bit of flavour to an otherwise fairly plain nut-based mush.

Between the white-sauce and the filling, there's a fair bit of work involved (it helped that we had some tomato sauce leftover from the eggplant rolls), and if I were doing it again, I'd probably up the tempeh filling a bit and cut down the amount of white sauce. Still, this was another astounding success, and satisfied us both for days of delicious lunches. So within two weeks we've gone from having no particularly exciting lasagne recipes to having cooked up two of the most deliciously satisfying lasagne recipes known to man. And they're both vegan! I'm still trying to decide which one is my favourite - we'll have to make them both again to help me choose.

Chop the tempeh into tiny little mince-sized cubes and then heat some olive oil in a pan and fry the cubes for around ten minutes - they should start turning golden brown.

Add in the soy sauce and liquid smoke and fry until the liquid has either been soaked up by the tempeh or has evaporated.

Take the tempeh out of the pan and use it to fry up the onions for ten or fifteen minutes - until they're completely soft and delicious. Add in the basil, the tomato sauce and the seasonings and simmer for as long as it takes you to make the cashew cream sauce. Once you're almost ready to build your lasagne you can throw the tempeh back in and stir it through the tomato sauce mix.

Blend up the cashews with the 100ml of oat milk in a food processor to get a thick paste.

Melt the nuttlex in a saucepan over medium heat and then add the flour, whisking it through the butter. Fry for a few minutes, whisking almost constantly and then gradually add the rest of the oat milk while whisking to keep everything as smooth as possible.

Once all the oat milk is in the saucepan, bring the mix to the boil and simmer for ten minutes or so - until it all starts to thicken up a bit. When it's almost as thick as you want it, add in the pre-ground cashew cream and the yeast flakes and stir everthing together well. Simmer for another five minutes or so and then finish things off with the pepper, lemon juice and salt.

To create your actual lasagne, layer up the two sauces with lasagne sheets - we went with a fairly ad hoc ordering - I think the main thing is to put some of the tempeh mix on the very bottom and to finish things up with the cashew sauce on top. As I said earlier, I'd rejig this slightly next time so that we have more of the tempeh and a bit less cashew cream - we were spreading the tempeh pretty thin by the time we were on our last layer.

Once it's all assembled, bake in a 200 degree oven for about half an hour - until the top layer browns nicely.