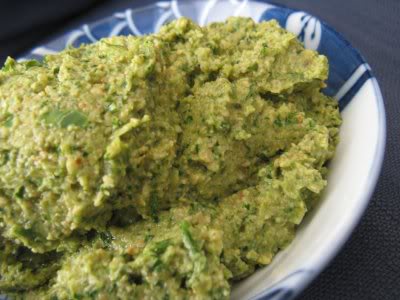 Emily's Tex-Mex themed potluck has already been well covered by bloggers far more timely than Cindy and I. I'm not going to go through all the wonders that were produced - suffice to say the food was plentiful and consistently amazing. I gorged myself almost to bursting point.

Our contributions to the food fiesta were relatively modest - Cindy whipped up something sweet (which will no doubt appear here shortly) while I went mad with savoury accompaniments. Cindy recommended two of her previous Mexi-themed successes: the chipotle-onion sauce and the coleslaw from this post, and I added something new: green pumpkin-seed mole.

This is another Veganomicon recipe, and is as simple as the two linked to above - the only cooking required is a bit of pepitas toasting and then it's everything in a food processor. It did require a brief jaunt to Casa Iberica for canned tomatillos, but everything else was pretty straightforward. And it turned out a treat - only a little bit spicy, with the flavours coming more from the fresh herbs and onions, it was a nice cooling sauce to go with the more firey chipotle-based option.

1 cup pepitas
4 black peppercorns
1 cup fresh coriander
1 cup fresh parsley
1 x 250ml can tomatillos
1 chilli, seeded and chopped
2 shallots, chopped coarsely
2 lettuce leaves, torn into pieces (although it's worth noting that I didn't notice the influence of the lettuce leaves, and you're probably better off just skipping this ingredient if you don't have any greens in the fridge)
2 cloves garlic, chopped
1/4 cup olive oil

Heat a frying pan over medium heat and toast the pumpkin seeds, turning regularly. It took me about 10 minutes, but it can probably be done in less if you crank the heat up a bit.

Put the toasted pepitas and the peppercorns in a food processor and blend into a coarse powder.

Add everything else except the oil and blend it all together. Throw in the oil and give it a last whizz and voila, you're done.
Posted by Michael at 9:57 pm