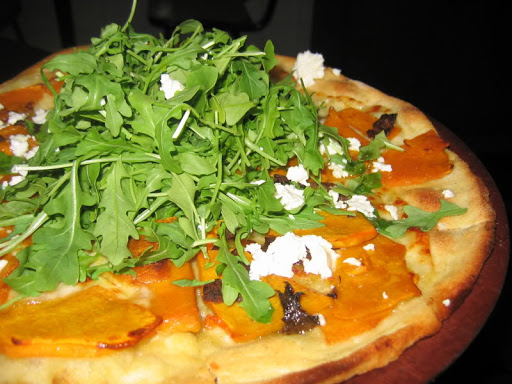 As has happened several times before, Michael has been inspired by Cheap Eats and I by a food blog to visit exactly the same restaurant. But we bided (bode? bid?) our time for a Northcote gig before getting ourselves a vague booking at Pizza Meine Liebe. (Vague in that they consented to writing down the reservation but thought that there might be another group still finishing their meal at that table - as it happened, the table was clean and ready to use on our punctual arrival.)
Tonight our booking was for three - along for the ride was my young-at-heart aunt Carol, who would also be joining us at the Northcote Social Club for some indie rock. Glancing at the circles traced on the wall, we soon agreed to share two large pizzas but required some more bargaining time to agree on the toppings. There's a page-long list with extra specials, too - not exactly traditional (as evidenced by the Queenslander and Ozzi pizzas in Mellie's review), but carefully grouped into complementary flavours (nothing irritates me more than a single 'vegetarian pizza' option on a menu, consisting of every non-meat product in the pantry). Multiple vegetarian choices were scattered throughout the list, and I suspect that the staff would willingly omit the meat from some of the non-veg choices too. Our final consensus was to order a Madame Pi Pi (mozzarella, pumpkin, porcini, rocket and fetta; $17) and from the specials list, Rosemary 4 Michelle (mozzarella, taleggio, potatoes, slow-cooked onions and rosemary; $17.50). 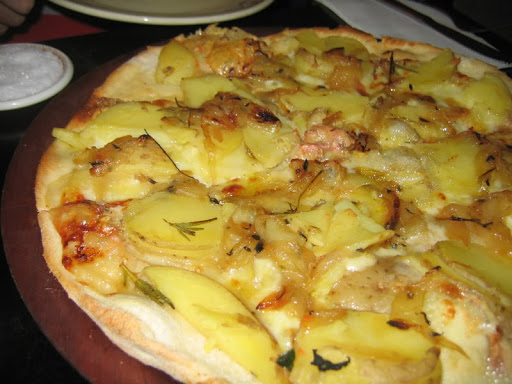 To my taste, they were great choices. The bases are fairly thin - chewy, doughy and crispy in equal parts, and comparable to those we've eaten at Oskar and at I Carusi. The difference I noted was that the pizza trays are liberally greased with oil but don't worry, we're not getting into icky Pizza Hut territory here! Similarly I was pleased that the cheeses played restrained roles rather than creating a congealed and oily top layer. Madame Pi Pi was a delicious clash of sweet and tender pumpkin against fresh leafy rocket - the porcinis were flavoursome but scarce. I enjoyed Rosemary 4 Michelle more than my similar order at Oskar - the cheese was more subtle and the onions were eye-rollingly soft and sweet. Some slices had just the right aromatic hit of rosemary, while others left me needing more. It takes a bit of care for the bread/potato/cheese combination to transcend its heavy, fatty foundation!
Comparison to I Carusi runs further than the pizza bases, with loud conversation bouncing off the walls and efficient, hip staff who fall just short of friendly. Oskar still tops Michael's pizza list and we live closer to I Carusi, but I'd like to revisit Pizza Meine Liebe next time there's a gig in Northcote - not least because we skipped dessert.
Address: 231 High St, Northcote
Ph: 9482 7001
BYO & licenced
Price: veg pizzas $11-20
Posted by Cindy at 8:17 am