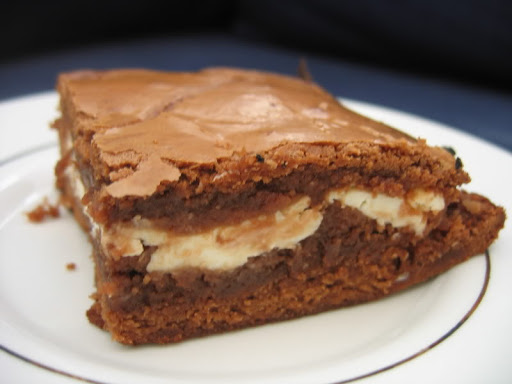 Many moons ago, for some no-longer-fathomable reason, I told Cindy I'd bake her a cake for her birthday. All sorts of things conspired against me actually doing so (for starters, she was swanning about Brisbane on her birthday while I was still down here) and it had become something of a running joke in the subsequent months. With four fairly empty Easter weekend days to fill, it finally happened - I baked for Cindy.

I insisted that the baked goods be of her choosing, but that they had to be from Nigella Lawson's 'How to Be a Domestic Goddess'. This was partly due to the startling ratio of its price to the number of things Cindy has made from it and partly due to my desire to feel like a fully fledged goddess. Just once in my life. After much careful browsing (mostly in the chocolate section it must be said), Cindy settled on cream-cheese brownies. I have a sneaking suspicion that she combined ease of preparation with perceived deliciousness in her selection criteria, but I'm not going to complain.

Now I'm not really a baking man - I've never been enthusiastic enough about sweet things to justify all the effort that goes into their preparation. But my main problem I think is all the fiddly precision that's required - I'd prefer recipes that asked for a slosh, sprinkle or chunk of something rather than those that specify things right down to the 1/4 teaspoon. And as soon as something goes even slightly wrong I just fall to pieces.

This recipe started well, with lots of fairly straightforward tasks like whisking eggs and melting butter but things began to go off the rails when it asked me to line a baking tin. I'm all for making things easy to extract from cooking receptacles, but greaseproof paper and I are not good friends. I can never make it sit properly and any pretence at neatness soon flies out the window. Sunday was no exception. Things weren't helped by the mixture not quite filling the pan as well as I'd have liked (see - the tiniest little things can set me off when I'm baking) and by the awkwardness of slicing 'spreadable' cream cheese. But, with a little help from Cindy (mainly with the pan-lining), I struggled through and, in the end, I was pretty proud of my efforts. The brownies could probably have used another five minutes in the oven, but they're a credible first effort: the cheese ended up in a fairly well-defined layer, the dough was moist, sticky and chocolatey and, most importantly, Cindy chomped one down gleefully. I must have done something right.

Preheat the oven to 180 degrees.

Melt the chocolate and butter in a saucepan over low heat.

While it's all turning to mush, combine the flour and the salt in a bowl and whisk the eggs in another bowl with the sugar and the vanilla extract (Nigella suggests "idly beating" the eggs, but I think just plain whisking will do).

Just before the last of the chocolate is melted, take the saucepan off the heat and let it cool for a few minutes. Once it's cooled slightly, stir in the egg and sugar mixture and then the flour and salt. Beat the mixture until it's smooth.

Pour about half the mixture into a smallish baking tin (the recipe suggests a 23cm square tin, 4 cm deep - I'd go for something slightly smaller if possible) that has been greased and lined.

Finally, pour the rest of the brownie mixture on top of the cream cheese layer and smooth things out so that none of the cheese is peeking out and the whole thing is a) vaguely rectangular and b) approximately smooth.

Bake for about twenty minutes, maybe a little longer if you like the inside of the brownies to be only slightly moist and sticky. Once it's done, let the tray cool and then extract the slab of brownie (aren't things easy when you've lined your tray?) and slice into appropriately sized pieces.
Posted by Michael at 9:07 pm

Labels: Chocolate, Dessert, How to be a Domestic Goddess, Nigella Lawson