We're only having the odd cool autumn day in Melbourne but the calendar has given me permission to launch into warm, comforting pies for dinner. Less than a week after our sausage rolls I was into the puff pastry again, for a recipe that I'd bookmarked from 101 cookbooks. The filling is a creamy but cheese-free concoction featuring diced sweet potato and corn kernels. But don't be fooled by its meek and mild appearance - the delicious smokey aroma comes from the addition of some fiery adobo sauce! 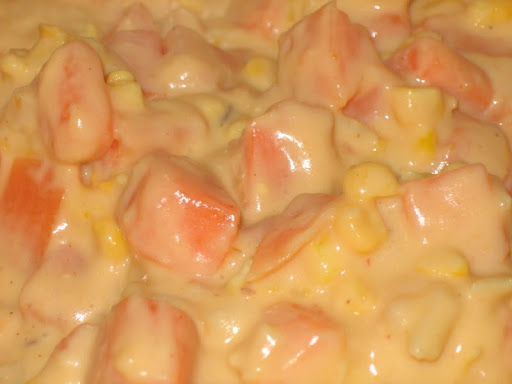 The only change I made from Heidi's recipe was to substitute plain flour for the cornstarch: it's what I had on hand and it thickens the sauce just as well. Our adobo sauce supply was running low and I probably didn't add the full tablespoon - even so, my initial test-tasting of the filling had my throat aflame! I was worried that I wouldn't be able to do more than nibble this meal but by the time the pies emerged from the oven, I found that the sauce was much milder.

On Tuesday night I imitated Heidi's pretty picture by filling ramekins and topping with pastry. My photos might not be quite as professional but I can assure you that this didn't diminish the eating experience at all! On the side we had our usual baby spinach leaves, wilted in just a touch of olive oil. With the leftover mixture I constructed larger square pies, as in the top photo. They're a bit less fiddly and have a higher pastry-to-filling ratio. Michael and I both thoroughly enjoyed this recipe, and it will no doubt reappear on our table once we've replenished our adobo sauce stocks.
Posted by Cindy at 12:33 pm